Nick Kyrgios was cool under pressure as he outlasted Stefanos Tsitsipas to maintain Australia's unbeaten run at the ATP Cup in Brisbane. 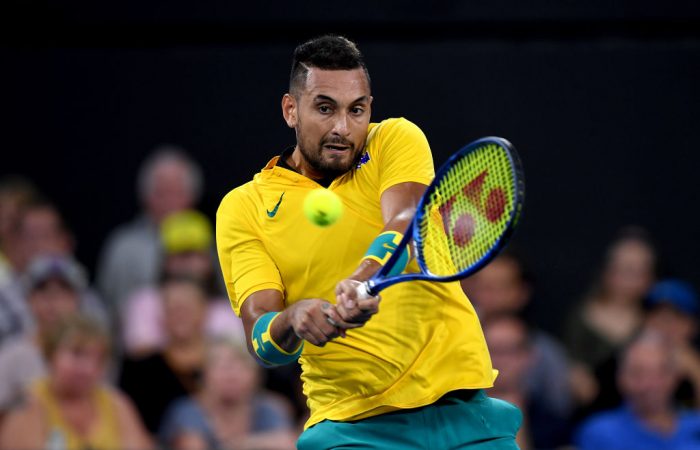 Nick Kyrgios kept his cool to outlast Stefanos Tsitsipas and seal victory for Australia in their ATP Cup clash with Greece in Brisbane.

After dropping the first set, the frustrated Tsitsipas slammed his racquet into the bench, accidentally clipping his father and Greece captain Apostolos Tsitsipas on the forearm.

Tsitsipas subsequently received a point penalty for unsportsmanlike conduct early in the second set when he smashed a ball courtside.

“It happened accidentally. I didn’t mean to do it and straight away forgot about it and moved on from there,” the world No.6 said of the earlier incident.

“I wasn’t aiming to do that, so it went out of control, unfortunately.”

By contrast, the Australian maintained composure throughout the challenging encounter.

“I didn’t see it (incident). I don’t think he meant it as well. I don’t think you should be giving it too much attention or looking too far into it, to be honest,” Kyrgios said.

“I’ve done some stupid things as well in the heat of the moment, so it was obviously an accident.”

A total of 4️⃣2️⃣ aces served up between these two in #Brisbane on Day Five.

Kyrgios held his nerve to give Australia an unbeatable 2-0 lead, ensuring the hosts went through the ATP Cup round robin stages undefeated with three straight victories to top Group F.

They are set to play Great Britain in a quarterfinal in Sydney on Thursday.

Australia completed a 3-0 whitewash of Greece when John Peers and Chris Guccione sealed a straight sets win over Markos Kalovelonis and Petros Tsitsipas.

Make that 9️⃣ from 9️⃣ for 🇦🇺 #TeamAustralia.@johnwpeers and Chris Guccione def. Markos Kalovelonis and Petros Tsitsipas 6-3 6-4 to make it a clean sweep against 🇬🇷 #TeamGreece.#ATPCup | #Brisbane pic.twitter.com/MNF6mjbnhN

Kyrgios missed the last tie against Canada with a back complaint but stepped up as Australia’s No.1 male player on Tuesday after world No.18 Alex de Minaur was rested against Greece.

Australian captain Lleyton Hewitt said he had rested de Minaur for precautionary reasons and ruled out injury on Tuesday night.

World No.48 Millman had to dig deep against an opponent ranked 438 places lower than him who was also battling an ankle complaint from the second set.

Millman was happy to get another chance to strut his stuff in front of his home crowd for Australia, who have already secured top spot in Group F and a quarter-finals berth in Sydney following wins over Germany and Canada.

However, the match didn’t exactly go to script for the world No.48.

Millman, 30, was expected to overpower his relatively inexperienced opponent.

But even when Millman finally found his rhythm in the second set, and Pervolarakis had to have his ankle strapped after going down mid-point, the Greek battler refused to go away.

Spurred on by a fanatical home crowd, Millman finally emerged triumphant to maintain Australia’s unbeaten run in their third tie of the inaugural tournament.