In a stellar start to the 2020 season, Sam Stosur ousts former world No.1 Angelique Kerber in Brisbane. 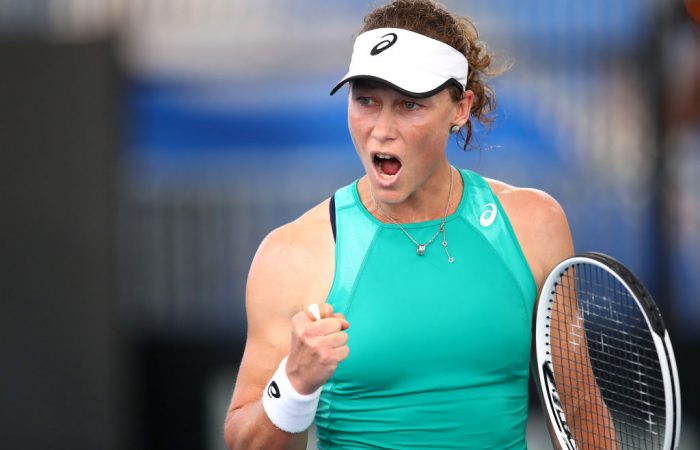 Sam Stosur has started her 2020 season in stunning style, defeating three-time Grand Slam champion Angelique Kerber in straight sets to reach the second round of the Brisbane International.

“That was a great match from me. Love playing in front of this crowd – you guys give me tons of energy so it’s nice to get a win and start the year like this. It’s amazing,” she said.

It’s the first time Stosur has reached the second round of her home event since 2016.

Joining her there was fellow Australian Ajla Tomljanovic, who survived the challenge of a third Aussie, Priscilla Hon, in three sets.

Tomljanovic’s victory sets up a second-round meeting with No.2 seed and defending Brisbane champion Karolina Pliskova – a rematch of last year’s quarterfinal.

Stosur, meanwhile, made a fantastic start, racing to a 5-2 lead early in the first set before Kerber rallied to force the set into a tiebreak.

Down 5-1 early, Stosur rattled off the next six points to claim the opening set.

The second set was a battle of attrition, with neither woman able to break their opponent’s serve.

Kerber came closest to gaining the advantage, the former world No.1 pushing Stosur to a 10-minute service game before the Australian held on.

Despite a recent history of early losses in Brisbane, Stosur showed no nerves to close out the match in comfort and claim victory inside two hours.

“Its the way I want to be all the time on court … it’s my first top 20 win in a while” – @bambamsam30 on her R1 win over Kerber #brisbanetennis pic.twitter.com/7AIO2ztmjk

It’s the fourth time in 10 meetings between the pair that Stosur has overcome Kerber, but her first win over the German since 2015.

Stosur, who is on the same side of the draw as world No.1 Ash Barty, will play the winner of the match between American eighth seed Madison Keys and Czech qualifier Marie Bouzkova in the second round.

Keys and Bouzkova will play on Tuesday.