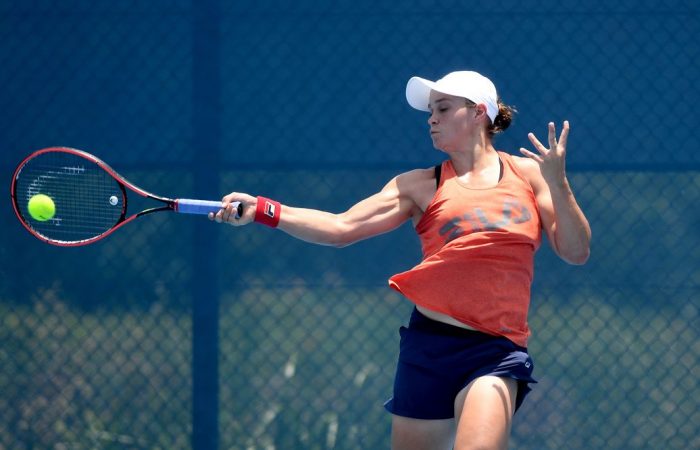 A Grand Slam champion potentially awaits in every round for Ash Barty at the Brisbane International, with Australia’s world No.1 handed a tough draw for the season opener.

The top seed will enjoy a first-round bye for the event which starts on Monday.

However, Barty will quickly be put to the test when she hits the court with a potential second-round clash with five-time major winner Maria Sharapova, a main-draw wildcard.

If successful, Barty could face dual Wimbledon champion and great rival Petra Kvitova of the Czech Republic or US Open victor Sloane Stephens in the quarterfinals.

Kerber in the first round takes on Australian major champion Sam Stosur, in what is a daunting first-round prospect for the 35-year-old Queenslander.

And Alja Tomljanovic will meet wildcard Priscilla Hon in an all-Australian first-round clash.

Should Barty fight her way to the final, reigning Australian Open champion Naomi Osaka might well be waiting.

It shapes as the ultimate Australian Open warm-up for Barty, who will arrive at Pat Rafter Arena as the overwhelming crowd favourite after a stellar 2019.

She claimed the world No.1 ranking after becoming the first Australian woman in 46 years to win the French Open.

Barty was the first Australian woman to reach No.1 since Evonne Goolagong Cawley in 1976 in a remarkable year in which she also lifted the WTA Finals trophy and led Australia to their first Fed Cup final since 1993.

But Barty’s doubles partner in Brisbane – world No.9 and singles sixth seed Kiki Bertens of the Netherlands – was not surprised by the Australian’s remarkable rise.

“I was impressed (by her rise) but, for me, it was not a surprise,” she said.

Barty skipped last year’s Brisbane International to contest the Hopman Cup but suffered a shock first-round exit the last time she played at Pat Rafter Arena in 2018, going down to Ukraine’s Lesia Tsurenko.

The 2011 US Open champion says she has not given up on giving Queensland fans something to cheer about as she enters her 21st year on the women’s tour.

Stosur has been eliminated in the first round of the Brisbane International five times in the past six years.

The last time she reached the second round of her home tournament was back in 2016.

However, Stosur said her lean record was not due to a lack of effort.

“You want that to happen,” Stosur said of Brisbane International success. “But sometimes when you want something so bad it doesn’t quite happen.”

For every ace she serves during the Australian summer of tennis, @samstosur will donate $200 to bushfire relief efforts: "For me, personally, I've actually been to a lot of these spots on holiday. I've been camping there. It's such a beautiful part of the world. So to see the devastation happening there is just so sad. For (the communities), the firies, the animals and everyone being affected, it's going to take a long time for this to regenerate and come back. Anything we can do to try and help out is something we should all try and get behind.” #SamStosur #BrisbaneTennis #Aces4BushfireRelief

But Stosur said she had been buoyed by a strong finish to the 2019 season in which she made the Guangzhou International Women’s Open final and the WTA Finals doubles semifinals with Shuai Zhang.

“The last part (of 2019) through China especially was really rewarding for me both on the singles and doubles court,” Stosur said.

“It’s always nice to finish (the year) with a highlight and going into the New Year thinking ‘that finished well now I have to try and pick it all up again’.

“And besides who knows when I will be able to play here in Brisbane again?”