Singles victories to John Millman and Alex de Minaur have given Australia an unassailable 2-0 lead over Canada at the ATP Cup in Brisbane. 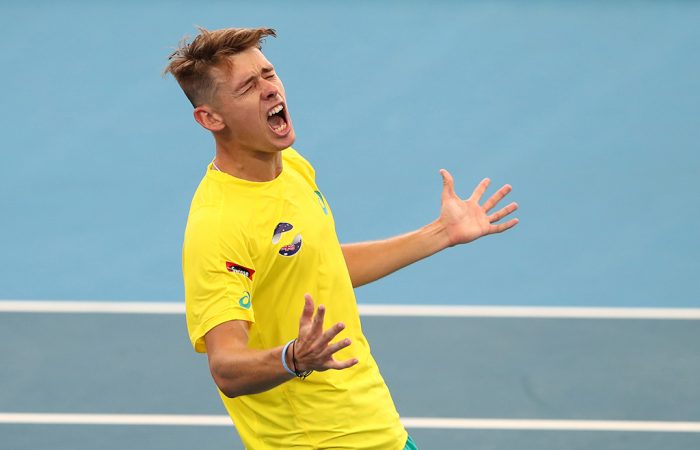 Alex de Minaur came back from a set and a break down on Sunday to defeat world No.15 Denis Shapovalov 6-7(6) 6-4 6-2 in three hours, giving the Australia an unbeatable 2-0 lead over Canada.

Earlier, hometown hero John Millman stepped up after Nick Kyrgios pulled out with a back complaint to down world No.21 Felix Auger-Aliassime 6-4 6-2 at Pat Rafter Arena.

“It’s never easy when you’re not totally expecting to play, but any opportunity to come here and play in front of a home crowd — I’ve been lucky to play on all courts in all venues all around the world, and there’s no place like home. I love playing here in front of the Queensland crowd,” Millman said.

“I’m so lucky and fortunate that in the off-season and when I’m back home I get to train on this court, day in day out, named after a legend. And I’ve got a legend (in Lleyton Hewitt) in the box too. So I take opportunity to come out here and play.”

An undefeated Australia will qualify for the finals in Sydney as the Group F winners if Germany beat Greece later on Sunday.

The doubles match pits Chris Guccione and John Peers against Auger Aliassime and Adil Shamasdin as Australia attempts to achieve a second straight 3-0 sweep after shutting out Germany on Friday night.

Australia managed to get some payback after Canada bounced them out of the Davis Cup quarterfinals in November in Spain. But the initial signs were ominous for the hosts.

Kyrgios also pulled out of Australia’s last meeting with Canada in the Davis Cup clash in Madrid due to a recurring collarbone injury.

Australia were bundled out 2-1 after Millman, Kyrgios’s replacement, went down in his singles rubber.

However, pumped up world No.48 Millman on Sunday stood tall before De Minaur delivered a typically gritty victory.

After also trailing Alexander Zverev by a set and break on Friday night, world No.18 De Minaur again appeared down and out, trailing 7-6(6) 4-2 before rattling off six-consecutive games to lead 2-0 in the deciding set.

He didn’t look back, celebrating his win with a jig after extending his career head-to-head record over Shapovalov to 2-1.

🇦🇺 #TeamAustralia win the match and the tie!

“Not too sure really (how I did it). Yet again, an amazing team effort. Johnny came out here, he played unbelievable. I had the whole team behind me. Even when things weren’t going my way. It’s just not over until the last point,” De Minaur said.

“I like to get as much on court time in front of this amazing crowd (smiling).”

There might be more good news to come out of the Australian camp.

It appears the withdrawal of Kyrgios had been precautionary, with the Australian No.2 mingling with the team before taking a seat courtside to cheer on his teammates at Pat Rafter Arena.

“He was a bit stiff yesterday afternoon, but also this morning. Johnny was obviously raring to go as well,” Australian captain Lleyton Hewitt explained.

“I’m super proud of the whole team. This is what playing for your country is all about. For these boys to get the opportunity to play in this brand new event, the ATP Cup, but for us to fo it in our home country as well is something pretty special for these guys.

“They come out here, they give 100 per cent every time they step on the court, and it makes my job very easy sitting on the sidelines.”

Australia next take on Greece on Tuesday.