From 5-2 down in the first set, Arina Rodionova wins 11 straight games to defeat Olivia Tjandramulia and secure a semifinal spot at the Australian Open Play-off. 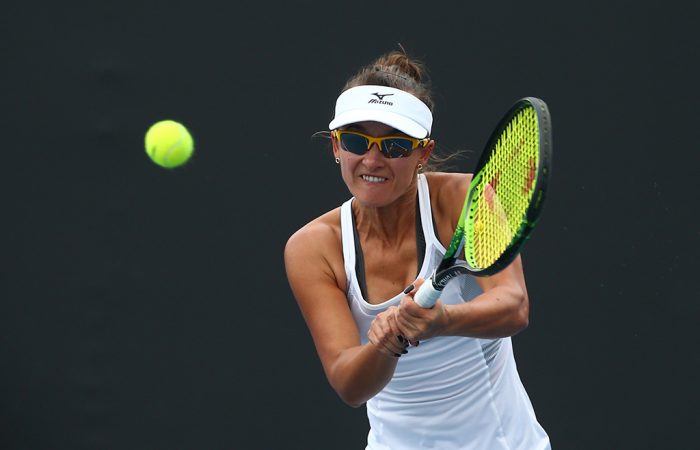 Arina Rodionova recovered from a slow start to dominate Olivia Tjandramulia in the quarterfinals of the Australian Open Play-off on Thursday.

Tjandramulia shot out to a 5-2 lead on a cool, windy day at Melbourne Park before Rodionova settled into the contest and began to dictate proceedings with her wider repertoire of shots and tactics.

She will next face Belinda Woolcock, who overwhelmed No.1 seed Maddison Inglis with her power and weight of shot to win 6-3 6-2.

In the other semifinal, eighth seed Abbie Myers will take on Storm Sanders.

“I don’t think it was my best start (today), I sort of didn’t play that well, I think there was quite a few unforced errors,” Rodionova said.

“I’m just glad out of it a little bit at 5-2, I started putting more balls in the court basically and making her play a little more and just doing my thing.

“I was pretty lucky to get away with the first set and in the second I changed some things so it worked a little better.”

Rodionova extended her head-to-head lead over Tjandramulia to 4-0, after beating Sara Tomic in straight sets in her first match of the Play-off.

In 2019, she has 11 times recovered from the loss of the first set to post victory.

Although she was able to take the opening set today, Rodionova nonetheless drew confidence from that regular ability to claw her way back from deficits and come through difficult situations.

“I think I do have a confidence in myself to be able to come back from different scores — I’ve done it quite a bit this year,” she said.

“It’s not as easy as people think to close out the set. It doesn’t really matter if you’re serving or returning. I feel like at this stage when its 5-2, 5-3 and especially 5-4, you always have an opportunity — it doesn’t matter if it’s a double break, or just one break, I feel like you’re always there.

“I just worked very hard for every point and you just never know what’s gonna happen — it’s not over until it’s over.”

Rodionova admitted she knew little of Woolcock, who sealed victory over Inglis with an ace up the T to cap a brilliant display.

Woolcock remembered the one time they had played — eight years ago, in the qualifying rounds of the Pro Tour event in Mount Gambier — but conceded it was a long way in the past.

“I think for me, and (with) the conditions, I need to make sure I stick to what I do best. She’s definitely a crafty player … a bit of an all-round player,” Woolcock said of Rodionova.

Despite the fact she was playing a similarly in-form Inglis — who shaved 255 places from her ranking in 2019 — Woolcock was nonetheless dominant.

“I definitely learned a lot of things when I was playing her in Playford about six weeks ago,” Woolcock said of her three-set loss to Inglis.

“I think heading into this match today, there were definitely a few things that I wanted to address.

“Throughout the last few weeks I’ve been working on a few different aspects of my game, and I think today it really showed well.

“I was really aggressive, I served big, I had great court positioning, and I was coming into the net. Just a few simple things that I stuck to, and it really paid off.”

In later matches, Myers got past wildcard Gabriella Da Silva-Fick 6-2 4-6 6-3 in the tightest match of the day.

Following them onto court was Sanders, who beat third seed Aiava 6-2 6-3 to take her singles win-loss record in 2019 to an impressive 14-2.

SANDERS: “I’ve just been better at staying calm and more mature on court”

This is just her fourth tournament into a singles comeback after a two-year break.