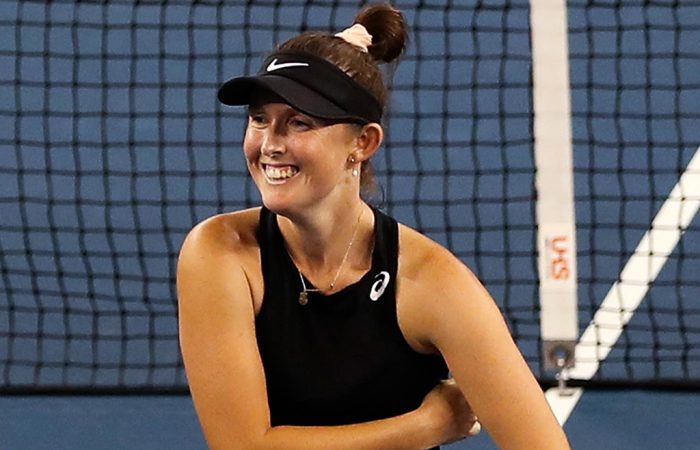 Storm Sanders continued her exciting comeback to the singles game with a dominant performance against Ellen Perez at the Australian Open Play-off on Tuesday.

Sanders beat the fifth-seeded Perez 6-3 6-1 at Melbourne Park to set up a quarterfinal meeting with No.3 seed Destanee Aiava, who accounted for 15-year-old wildcard Talia Gibson 6-1 7-6(2).

Also progressing was top seed Maddison Inglis, who recovered from a break down in the third set to eventually subdue 18/u Australian champion Charlotte Kempenaers-Pocz.

Sanders, after a two-year absence from singles, made her comeback at the 60K Pro Tour event in Bendigo in late October, reaching the quarterfinals as a qualifier.

The next week, she won the 60K title in Playford, then advanced to the second round of the WTA 125K tournament in Taipei, also after qualifying.

After having no singles ranking, she is now up to No.376 and improved her 2019 win-loss record to 13-2 with victory over Perez.

“It’s pretty crazy to be honest — I was not expecting that at all,” Sanders said to tennis.com.au when discussing her instantaneous success.

“I made the decision, maybe around August, to come back and play singles in November, basically. I knew I was hitting the ball well, but playing matches is very different, having that pressure and stuff.

“I think I’ve just been better at staying calm and just more mature on the court. I’m just trying to be the best that I can and not worry so much about my opponent and the results. It’s just going out and playing each ball on its merit.

“I think I’ve been doing that really well and I think the results show that, that I’ve probably matured a little bit as well.”

From 3-3 in the first set, Sanders ripped through nine of the next 10 games against her fellow left-hander to progress a step closer to the Australian Open 2020 main draw.

“It was good. I think when you haven’t played a few matches for a few weeks … you always come out a little bit unsure and you just want to play solid and start solid, which I think I did really well,” said Sanders, whose last match in Taipei came almost a month ago.

“The conditions are so blustery. It was tough, and it was a good fight. I started getting some freebies from Ellen, who started hitting a few unforced errors.

“I felt like I just really put the pressure on her and tried to be super positive and tried to use the conditions to my advantage.”

Meanwhile, almost four years since her only appearance in the Australian Open main draw, Inglis believes she has developed the fighting qualities that could steer her back to the Grand Slam stage.

The 21-year-old needed every bit of them to scrape through her opening match at Melbourne Park, as emerging teenager Kempenaers-Pocz threatened to produce a major boilover.

Down a break at 3-4 in the deciding set, Inglis rattled off three straight games to snatch a tough 2-6 6-3 6-4 win in a match hampered by an early rain delay and strong winds.

The late rally included a pair of breaks against Kempenaers-Pocz’s powerful serve.

In the quarterfinals Inglis will face Belinda Woolcock, who beat Alison Bai 6-3 6-4. And the top seed has that main-draw wildcard in her sights.

“It’s a pretty big prize, one that I’ve had before, which was really good having that opportunity,” Inglis, the Play-off champion in December 2015, told AAP.

“I feel like I’m a better player for it and I really hope this week goes my way. But if it doesn’t, I’m direct into qualifying, so that’s exciting as well.”

Inglis’ appearance in the 2016 Australian Open was a brief one; she suffered a first-round exit at the hands of 21st seed Ekaterina Makarova.

“My biggest change (since then) is mental,” Inglis said.

“I love the battle. I loved being out there today (against Kempenaers-Pocz) and I loved having to come back. I was a set down and I had to change something or do something, which was really cool.

“I really like being in that situation where you have to work it out. I never used to be like that. I’m training really hard and wanting it a bit more now that I’ve had a little bit of success.

“I’ve definitely changed a lot and it’s for the better, I think.”

Rodionova will next face Olivia Tjandramulia, who upset sixth seed Jaimee Fourlis — a Play-off champion in December 2017 — in a three-set tussle.