18/u Australian champion Tristan Schoolkate, a wildcard entry into the AO Play-off, upsets No.2 seed Andrew Harris in five sets on Monday at Melbourne Park. 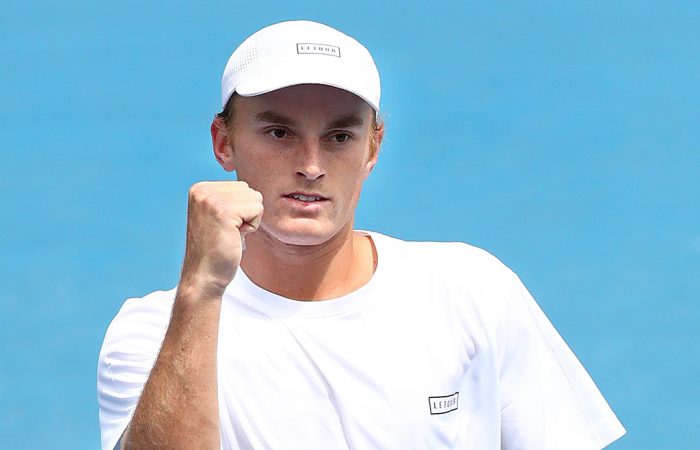 Schoolkate rebounded to win 4-6 7-6(2) 6-2 3-6 6-2, a victory setting up a meeting with eighth seed Maverick Banes, who beat wildcard Rinky Hijikata in straight sets.

After winning last week’s 18/u Australian Championships, Schoolkate is now on a seven-match winning streak at the December Showdown.

“I had a great week (in the 18s), I played good throughout, and definitely saved my best tennis for the final, which was two days ago. I think I carried on from there and played really well today, so very happy with last week, and also today,” he told tennis.com.au.

“He’s playing really good tennis, and for me to come out on top in a fifth set was awesome.”

Harris entered the AO Play-off following an excellent 2019 season, improving his ranking from No.400 at the end of 2018 to a career-best mark of No.159 in November after reaching three ATP Challenger finals.

Yet serving for a two-sets-to-love lead against Schoolkate, he faltered, opening that game with a double fault before eventually getting broken.

Ceaselessly attacking, Schoolkate worked his way back into the match and ultimately overwhelmed the Victorian, ending the contest with an inside-out forehand winner.

“If you go down two sets to love it’s a long way back. And against a guy like that he’s not going to let up, and he’s going to play efficient, really good tennis,” Schoolkate said.

“For me to snag that set and play probably one of the better tiebreaks I’ve played was really helpful, and sort of got me on a roll. And I played a really good third set, and ended up getting there in the fifth. It was good.

“Training’s been really hard (recently). And for me to actually see it as sort of coming through and maybe being the reason that I won today, was really great.

“I’m so happy that I put in the hard yards and it’s sort of paying off.”

In other results, No.1 seed Alex Bolt was trailing two sets to one before opponent Blake Mott fell and landed heavily on his left wrist, forcing him to retire from the match shortly after.

An emotional Bolt conceded he was the second-best player on court.

The fourth set was level at 3-3 when Mott tripped and fell heavily while attempting a forehand smash, hurting his left wrist.

Devastating for @BlakeMott96
who took a nasty tumble mid-rally against @abolt15 and retired while leading 2 sets to 1 in the #AusOpen Wildcard play-offs.

“I still really don’t know what to think about it,” Bolt told AAP. “It really should be Motty here talking to you, not me. He was by far the better player out there today, but unfortunately he went down with a bit of an injury and couldn’t play on.

“Me and him share the same coach (Peter Luczak), you know, we’ve been training together for the past six weeks, every day.

“It’s hard not to feel sorry for the guy.”

Mott had only returned to professional tennis in September after almost two years out of the game, and had put together an impressive 14-2 record in that time — including a win over Bolt en route to the third round of the ATP Traralgon Challenger.

“I’ll count my lucky stars tonight and then see if I can go a few (rounds) further this year,” Bolt said.

Meanwhile, seeds John-Patrick Smith and Aleksandar Vukic set up a quarterfinal meeting after both came through their first-round matches in straight sets.

Purcell and Bourchier will clash on Wednesday for a place in the semifinals.