The Play-off winner in 2017, Denis Istomin falls on the first day of action in Zhuhai to Korean young gun Yunseong Chung. 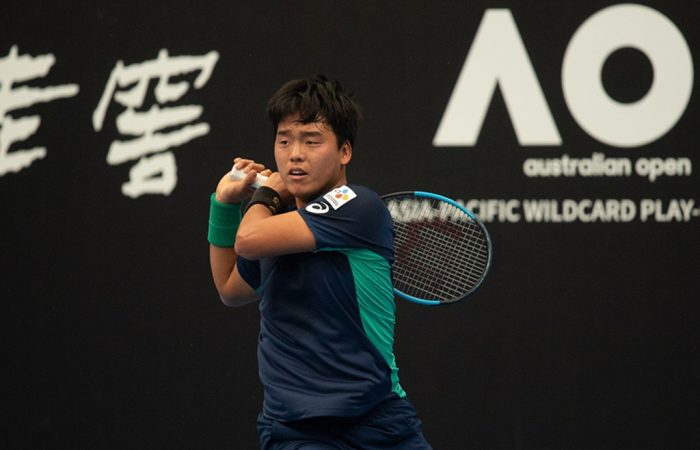 Chung beat the Uzbek 7-5 6-3 in his opening match at the Hengqin International Tennis Center, with the world No.316 remaining on course to earn a chance to compete at Melbourne Park in January.

“Two weeks before the match, I was training in Jeju Island. When I practised in Jeju, I had some goals, all to improve my skills. That’s why I had a wonderful performance.

“I feel a little pressure not only on the court but in life.”

Chung also pointed to the influence of countryman Hyeon Chung, who had huge success in Melbourne when he reached the Australian Open 2018 semifinals.

“There are not a lot of top players in Korea. Hyeon Chung made the semis at the Australian Open. The sponsors want me to get into semifinals,” he said.

“I will do my best in next match and want to get that wildcard as much as possible.”

The Korean teen will next face Indian No.7 seed Sasikumar Mukund on Friday, after Mukund beat compatriot Sidharth Rawat 6-3 6-2.

On the women’s side, Kai-Chen Chang from Chinese Taipei bounced back in the final two sets against No.6 seed Ziyue Sun to win 4-6 6-4 6-0 and take her place in the quarterfinals.

Chang, last year’s runner-up, had advanced to the AWP main draw after an emphatic win over Xiuyuan Li from China in qualifying on Tuesday.

Even though she is the most experienced player at this year’s event, the former world No.82 Chang has slipped to No.598 after having played just one event — the qualifying draw at the 25K ITF tournament in Nonthaburi, Thailand — since April.