Australia's Davis Cup team is aiming to snap a three-tie losing streak against Belgium in Madrid on Thursday morning. 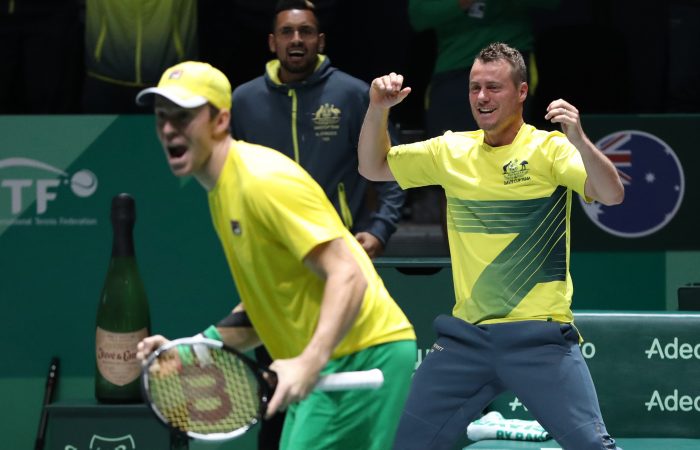 Australia must bury their Belgium hoodoo if they are to book a spot in the quarterfinals of the Davis Cup in Madrid.

Lleyton Hewitt’s side brushed aside Colombia, the lowest-ranked team in the tournament, with Nick Kyrgios and Alex de Minaur securing straight-set victories.

They were then backed up by Jordan Thompson and John Peers, who beat world No.1-ranked Colombian doubles duo Robert Farah and Juan Sebastian Cabal, to secure a 3-0 win.

The Aussie duo toppled the reigning Wimbledon and US Open champions to give themselves the best preparation for Belgium pair Sander Gille and Joran Vliegen.

But Australia know they will face a much sterner test against the Belgians, who have won the past three meetings between the two nations dating back to 2007 and featured in two of the past four Davis Cup finals.

Two years ago in Brussels, Hewitt’s side went in to the last day of the World Group semifinal leading 2-1, only for Belgium No.1 David Goffin to beat Kyrgios and level the tie.

An inspired Steve Darcis then blew away Thompson in front a delirious home crowd to leave Australia without a win against Belgium since 1991.

Kyrgios will face the wily Darcis in the opening tie on Wednesday (Thursday AEDT) before de Minaur meets world No.11 Goffin, who holds an outstanding 22-3 record in Davis Cup singles rubbers.

It will be the first meeting between the pair, but world No.18 de Minaur is in the best form of his young career.

In September he won the Zhuhai Championships and the Sydneysider followed that up by reaching the deciders of the Swiss Indoors and the Next Gen ATP Finals.

The 35-year-old Darcis is ranked 157th, but his habit of upsetting Australia goes back to 2010 when he beat Carsten Ball in Townsville to win the decisive rubber of a World Group play-off tie.

“They are quality players Goffin and Darcis,” Hewitt said.

“They both play extremely well in Davis Cup. They have made a couple of finals and we expect them to play well.

“They have a very good doubles team as well and are even across the board.

“I don’t think Darcis’s ranking is where his level is as a Davis Cup player.