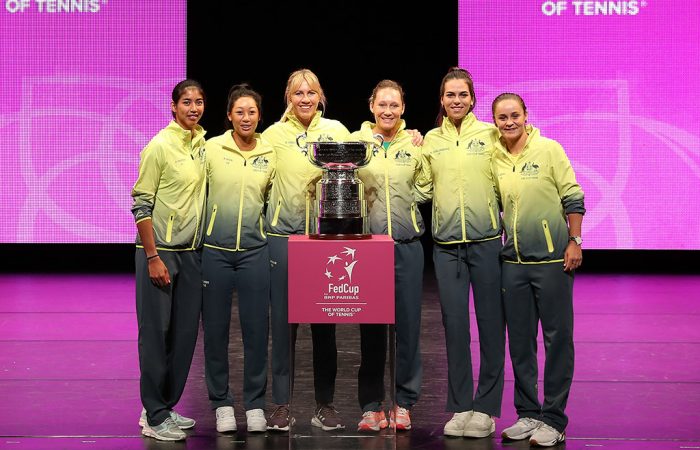 Australian Fed Cup captain Alicia Molik has opted for top-ranked Australians Ash Barty and Ajla Tomljanovic to lead the hosts into action for this weekend’s final against France in Perth.

World No.51 Tomljanovic, playing for Australia for the first time, will open proceedings on Saturday at RAC Arena against French No.1 Kristina Mladenovic, before Barty takes on Caroline Garcia in the second singles rubber.

Sunday’s reverse since will see Barty play Mladenovic and Tomljanovic play Garcia, before the final doubles rubber, where Barty will team with Sam Stosur to take on Garcia and Mladenovic.

“Actually I was hoping to be first up. I think it’s good to get it underway right away — I think it’s going to add to the moment and be extra special. I’m definitely really excited,” said Tomljanovic, who beat 40th-ranked Mladenovic in both of their previous meetings back in 2014.

“I think there will be no secrets tomorrow, we know each other’s games really well. I think she’s had a pretty strong end to the season so I’m definitely expecting her to bring her best, and so will I.”

Barty is looking to extend her Fed Cup winning streak to 15 matches, a run stretching back to February 2017.

This year alone she is 6-0 in Fed Cup play, winning all four of her singles rubbers and combining with Priscilla Hon and Sam Stosur in decisive doubles rubbers to help Australia through to its first final in 26 years.

She takes a 2-1 head-to-head record into her match-up with 43rd-ranked Garcia, winning their last two battles — including just recently in the Wuhan second round in September.

Team Australia and Team France glammed up on the black carpet.

“Caro and I have had some exceptional battles in the past … I’m looking forward to another really good match,” the world No.1 said.

“Caro’s a really good friend of mine and I know we both play our best tennis during Fed Cup weeks, so I think tomorrow’s match is going to be of a really high quality.

“I’m certainly going to have to bring my best to make sure I can match it with her.”

Molik, who for the first time had the option of selecting Tomljanovic for a Fed Cup tie, said the decision was nevertheless a difficult one.

“It’s exceptionally tough to always decide on Day 1 your two singles players to go out on the first day,” Molik admitted.

“For us I think it was a matter of match-ups for our opposition Mladenovic and Garcia. I feel like we’re going in with our strongest two players for Saturday. And of course things can change for both teams on Sunday.

“I feel like it’s the right decision. But within this team everyone has brought such a high level in practice and it has been difficult; sets have been very close and that’s really the way we want it.

“It should be a tough decision.”