Ash Barty wins her fourth title of season 2019 -- and the richest prize of her career -- with victory over Elina Svitolina at the WTA Finals in Shenzhen. 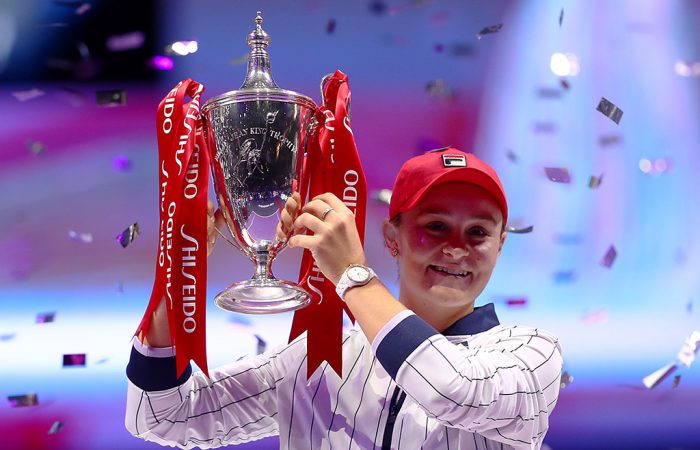 Ash Barty has capped a remarkable season with victory at the prestigious season-ending WTA Finals in Shenzhen, China.

The Australian, who had already locked up the year-end No.1 ranking, defeated Elina Svitolina 6-4 6-3 on Sunday night to cement her status as the world’s top female player.

“It’s been the most incredible year for me,” she said.

That's the match and the title!@ashbarty beats Svitolina 6-4, 6-3 to win the Billie Jean King Trophy at the @SHISEIDO_corp @WTAFinals Shenzhen! pic.twitter.com/eiiiXs84rY

Barty also claimed the biggest champion’s cheque in the history of tennis, taking home US$4.42 million for her stellar week at the elite eight-player tournament.

She becomes the first Australian champion at the tournament since Evonne Goolagong Cawley in 1976.

In what has been a remarkable year, the 23-year-old has claimed four titles — Roland Garros, WTA Finals, Miami Open and Birmingham — on all four surfaces.

She has won 56 matches, earned US$11.3 million and is projected to extend her lead atop the WTA rankings to almost 2,000 points over second-ranked Karolina Pliskova.

And her unforgettable year is not over — she still has the Fed Cup final in Perth to come.

Barty had never beaten Svitolina in five previous meetings, most recently going down to the Ukrainian in a heart-breaking three-set, three-hour fourth-round match at Indian Wells in March.

But in a high-quality affair that made the notoriously slow indoor hard court look a whole lot quicker, Barty dominated the defending champion with her heavy, forceful forehand and was willing to attack the net behind it.

With games going on serve until deep in the first set, Barty made her move in the 10th game, producing a flurry of winners to take the set.

She sealed the opener with a vicious forehand return; it was her 19th winner of the set, while Svitolina had struck just six.

Svitolina, the defending champion, responded strongly in the second set, breaking for a 2-1 lead.

Yet Barty did not allow the Ukrainian to gather any more momentum, breaking straight back and ultimately winning three straight games to move ahead 6-4 4-2.

After winning a spectacular point, Barty was within two points of extending that lead to 5-2 until Svitolina dug in and broke serve.

Yet that would be the last game she would win.

Barty re-set, came out on top of a torrid eighth game — she held two break points at 15-40, later saved two Svitolina game points, then converted her third break point — and then served out the match without losing a point.

“I want to congratulate Ashleigh for a great tournament and an amazing end of the year. For her team as well,” Svitolina said.