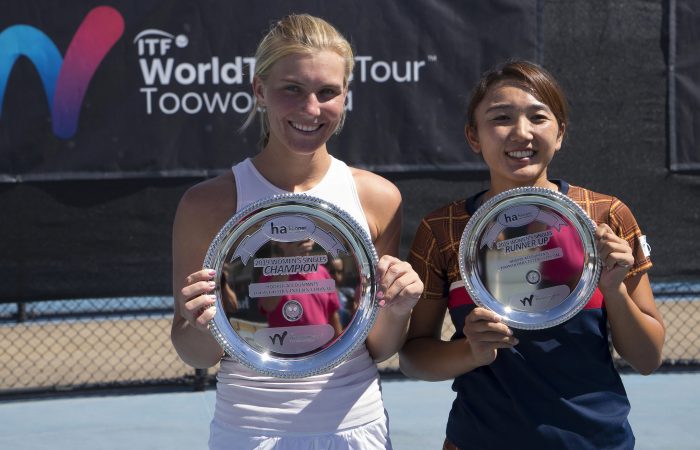 The West Australian stormed through the field this week, dropping just a single set along the way, in her defeat of Japan’s Kyoka Okamura 6-1 4-6 6-0 in Sunday’s final.

She is projected to rise to a career-high ranking of No.165 following the triumph.

“It’s been a long four weeks, lots of matches,” she said of her Australian Pro Tour thus far. “I’m really glad to finish on a positive note and get the win today.”

The title marks the top seed’s second final in succession, after she made the Brisbane final last week, losing to in-form American, Asia Muhammad.

“The last two weeks have been really awesome, making two finals, so I’m very happy,” Maddison, 21, added. “I actually came into the week with bone bruising on my heel, so the plan was just to go out in the first match and see how it felt. Now I’ve won the tournament, so I couldn’t ask for a better finish.”

Experienced Victorian Olivia Rogowska also regained some form, the No.3 seed battling her way to a semifinal berth – with all her matches going the distance – before falling to Okamura.

Belinda Woolcock also performed well, ousting second seed Destanee Aiava before also succumbing to Okamura at the quarterfinal stage, while Alexandra Bozovic upset Muhammad (No.4) on her way to the last eight.