Ash Barty comes back to defeat Caroline Garcia in Wuhan after Alex de Minaur beats John Millman in an all-Aussie clash in Zhuhai. Alexei Popyrin falls in his opening match at Chengdu. 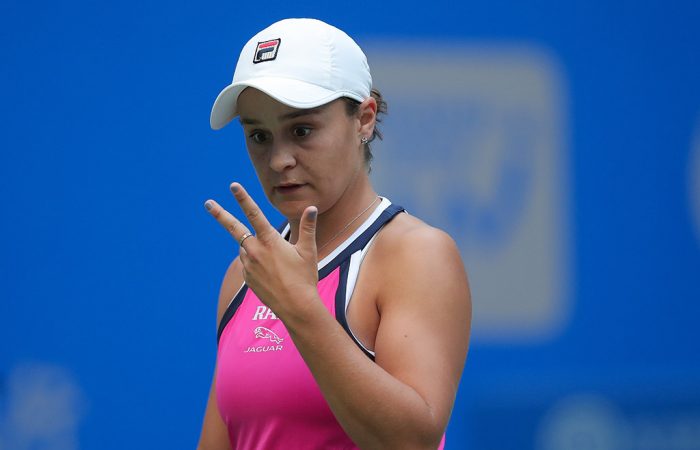 Ash Barty overcame a tough challenge from Caroline Garcia to reach the last 16 at the WTA Wuhan Open on Tuesday.

In a re-match of the 2017 Wuhan final — and perhaps a preview of a singles rubber at the upcoming Fed Cup final in November — Barty turned the tables on the Frenchwoman in winning 4-6 6-4 6-1.

The victory, in two hours and 11 minutes, sets up a third-round meeting with Sofia Kenin, who beat Barty in her opening-round match in Toronto.

“It was very good quality; even that first set it could have gone either way so I just had to keep chipping away, keep trying to turn the match in my favour and I’m very glad I was able to get out of that one,” Barty said.

“My rhythm got better and better. In the first set in particular I had too many second serves and I was able to have a lot better serving set in that second set and was able to roll through it in the third.”

Barty saved three break points in the opening game of the second set and from there the set went on serve, before the world No.1 broke Garcia in the 10th game to snatch it 6-4.

She then won six of the final seven games to score her second win over Garcia; the first came in Zhuhai in 2018.

Also in Zhuhai, the ATP Tour is now staging an event for the first time, and it was here Alex de Minaur overcame fellow Australian John Millman in the first round.

De Minaur was dominant in a 6-1 6-3 win over Millman, sealing victory in 70 minutes.

At the ATP event in Chengdu, qualifier Alexei Popyrin fell in the first round to Fernando Verdasco.

Popyrin led 4-1 in the second set and held two break points to extend that lead to 5-1, yet the Spanish veteran recovered to win 6-2 7-5.

Verdasco will play Chile’s Christian Garin for a place in the quarterfinals.