John Millman, a lucky loser entry into the main draw in Montreal, wins through to the second round while No.1 seed Ash Barty was upset in three sets by Sofia Kenin in Toronto. 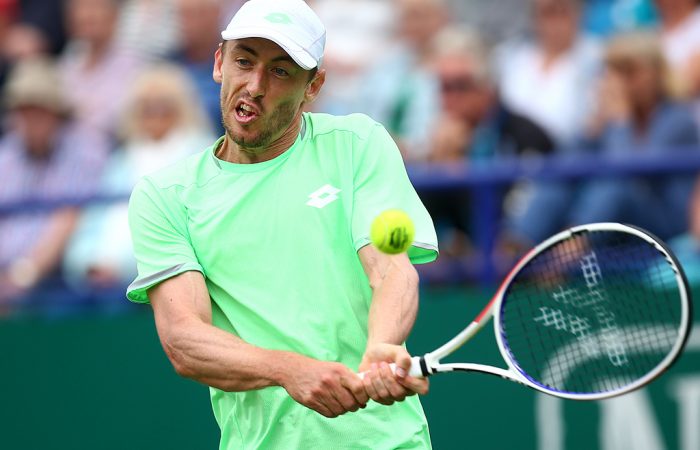 John Millman was the sole Australian to advance to the second round of the Rogers Cup on Tuesday after Ash Barty, Nick Kyrgios, Alex de Minaur, Jordan Thompson and Ajla Tomljanovic lost their opening matches in Canada.

Millman needed more than two-and-a-half hours to battle past Spanish veteran Feliciano Lopez 6-7(4) 7-6(2) 6-3 in an enthralling match at the ATP Masters 1000 event.

The Australian will face Marin Cilic next after the Croatian 14th seed beat Bradley Klahn 6-3 7-6 (9-7).

Millman fell in the final round of Montreal qualifying but took his place in the main draw as a lucky loser following Matteo Berrettini’s withdrawal due to an ankle injury.

Scores were locked at 4-4 in the second set before the match was halted due to a lengthy rain delay; when players returned, Edmund broke serve at love and served out the match in the next game, sealing the win on his second match point with an ace.

Meanwhile, Barty’s world No.1 ranking is in jeopardy after the Australian was a shock casualty in the second round in Toronto.

Barty fell to Sofia Kenin 6-7(5) 6-3 6-4 in just under two hours on Wednesday, a result marking the American’s first victory over a top-five WTA player.

Barty, playing for the first time since losing in the fourth round at Wimbledon a month ago, enjoyed a bye in the opening round and struggled to find her rhythm on her return to the circuit.

“I think it was a little rust but I think just in general it was just a bit loose,” Barty told wtatennis.com. “At times I was missing by big margins, which is not something that I’m used to or comfortable with but it’s not panic stations.

“It’s my first match on hardcourt in a long time.”

Barty took the first set against Kenin after racing out to a 5-1 lead in the tiebreaker. But Kenin then took control of proceedings in the second, carving out a 4-0 lead before stifling a three-game Barty comeback to take the match to a third set.

World No.29 Kenin nearly squandered a 4-1 cushion in the decider but held her nerve and closed out the match when a misfiring Barty sent a routine forehand long.

“It’s very different conditions here and different coming from home, training in winter at the moment, where the ball is a little lower and here it’s quite lively and quick off the racquet,” Barty said.

“All in all, I didn’t adjust well enough or quick enough to the conditions how I needed to.”

Barty, who could now fall from the top spot this week — "I couldn't tell from you a bar of soap what's going on with the rankings."

The defeat means Barty will lose the No.1 ranking if Japan’s Naomi Osaka wins her second-round match against German qualifier Tatjana Maria.

Czech Republic’s Karolina Pliskova also has the chance to take the top ranking this week but must reach the semi-finals to have any hope.

De Minaur paid the price for his inability to capitalise on break-point opportunities in a 6-4 7-6(6) loss to Dan Evans.

The 20-year-old could only break serve once from eight chances while his British opponent nailed both of his in their two-hour encounter.

Others to advance to the second round on Tuesday were Guido Pella, who eliminated 15th-seeded David Goffin in straight sets, as well as Diego Schwartzman and Radu Albot.