World No.1 Ash Barty was in a philosophical mood following her three-set loss to Alison Riske in the last 16 at Wimbledon. 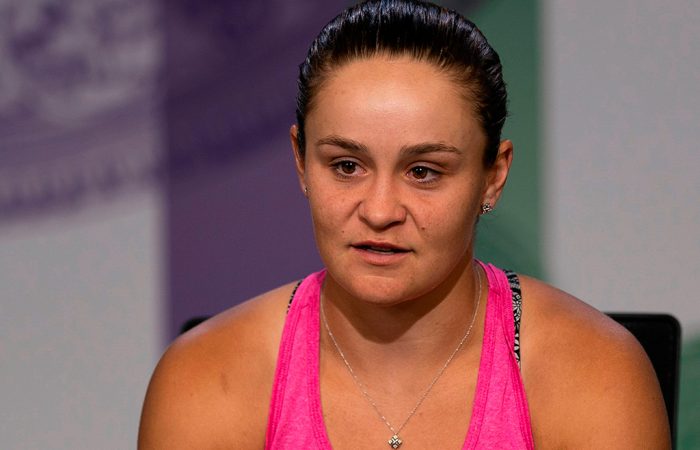 Ash Barty’s Wimbledon singles campaign may have come to an end earlier than she had hoped, but the Australian could nevertheless see plenty of positives following an incredible two months in Europe.

Barty, the world No.1 and top seed, fell 3-6 6-2 6-3 to Alison Riske on Monday, a result preventing what would have been a dream quarterfinal clash with Serena Williams.

Yet Barty, extremely complimentary of her deserving opponent, showed an impressive ability to step back and look at the bigger picture of what she had achieved in since departing Australia for the European clay-court swing in the first week of May.

“Disappointed right now. Obviously it’s a tough pill to swallow. In the same breath, it’s been an incredible few months,” she said.

“New ground for me here at Wimbledon. This is the best we’ve done. Very proud of what we’ve been able to achieve.

“The consistency we’ve brought day in and day out, has been next to none. I think that’s one of the best things about this trip.”

This was Barty’s first ever appearance in the second week of the singles event at Wimbledon. She arrived at the tournament fresh off winning the Birmingham grass-court title, a victory that saw her ascend to world No.1.

And before Birmingham, Barty broke through for her first Grand Slam singles title at the French Open, becoming the first Australian since 1973 to triumph at Roland Garros.

She came to court against Riske having won her last 15 matches, and when she took the first set, she had won 21 consecutive sets, a run stretching back to when she dropped the opening set in her French Open semifinal victory over Amanda Anisimova.

“We’ve done absolutely everything. I’m so proud of myself and my team over the last six to eight weeks. We’ve had an incredible trip, incredible couple of months,” Barty reflected.

Barty said she had no regrets when asked if there was anything she would change about the way she approached this tournament.

“We’ve planned our days and prepared as best that we can,” she answered.

“I didn’t win a tennis match. It’s not the end of the world. It’s a game. I love playing the game. I do everything in my power to try and win every single tennis match. But that’s not the case.

“It’s disappointing right now. Give me an hour or so, we’ll be all good. The sun’s still going to come up tomorrow (smiling).”

Having risen to world No.1 on 24 June, Barty said she had not felt bothered by the brighter spotlight that came with being the No.1 seed at a Grand Slam tournament for the first time in her career.

“I haven’t lived my life any differently,” she reflected.

“There’s a little bit more attention, a few more of you guys here in the press rooms (smiling).

“(But) nothing has really changed. I try to go about it the same way, the right way, the way that I believe works for me and my team.”

Barty and her team, following the tournament, will return to Australia for some much needed rest, relaxation and recovery.

For Barty, that will come in the United States.

“I think it’s also important to really celebrate what we’ve been able to achieve over the last eight weeks,” she said.

“Go and rest and recover with the family back home, then switch focus back to the hard courts.

“I love that time of year, I love getting back over to the summertime (in the US). I have some really good memories from last year.

“We go back, we knuckle down, train again, then we go again.”