Barty surprised by rapid ascent to No.1

New world No.1 Ash Barty says she always aimed to reach the top of the game - she just never imagined it would happen this quickly. 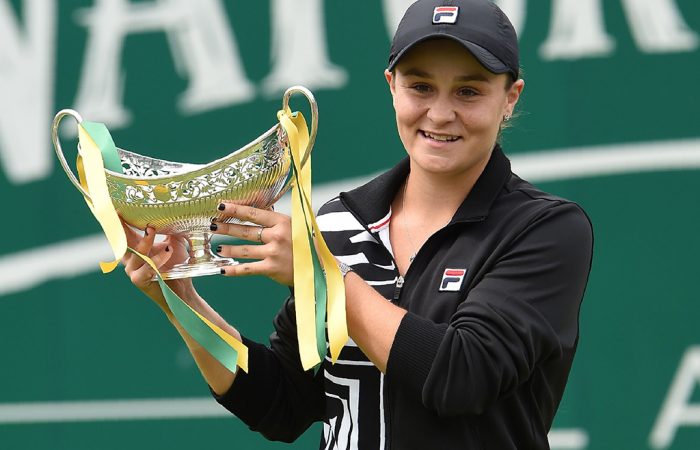 Ash Barty only returned to competitive singles action three years ago after stepping away from the game for almost two years as a teenager.

Since coming back, she has gone from being an unranked prospect to world No.1.

It has been an extraordinary ascent, capped by her triumph on Sunday over Julia Goerges in the WTA Birmingham final. That victory saw her become the first Australian women since Evonne Goolagong in 1976 to top the rankings.

Barty was asked to cast her mind back to her comeback tournament, a minor $50,000 ITF tournament on grass at Eastbourne where she began in the qualifying rounds.

Had her return to tennis gone beyond her expectations?

'It's been the most amazing journey!'

@ashbar96 reflects on her ascension to WTA World No.1 by clinching the #NatureValleyClassic trophy 🏆#ItTakesWTA pic.twitter.com/DFLJu5EUKP

“We had a very vague plan to try and get back to the rhythm of it and to playing again. But certainly not for it to happen this quickly,” she replied.

“It is always a goal to try and be the best. It’s ultimately why we train, why we compete and play, but for it to happen in this way has been amazing.

“It’s just hard to put into words what we have been able to achieve over the last few years and to be where we are now is just incredible.”

Barty stopped playing tennis after a first-round loss at the 2014 US Open. She dipped her toe back in the competitive waters in early 2016 by playing a handful of doubles events on the Australian Pro Tour, but did not return to the singles court until that Eastbourne tournament, where she opened her qualifying campaign with a 6-0 6-2 win over Bulgaria’s Julia Terziyska.

Time to hear from the #NatureValleyClassic Champion and new @wta World No.1 @ashbar96 👏👏 pic.twitter.com/40uQRJ7iJi

Barty went a stellar 11-2 across her first two events – qualifying for both Eastbourne and the Nottingham WTA events, reaching the semis and quarters respectively – and despite a sparse playing schedule finished that year inside the top 300 with a 16-4 win-loss record.

The next year, she announced herself as a force, winning her first WTA singles title in Kuala Lumpur and posting a 42-17 record en route to cracking the top 20.

She backed up that breakout year with another top-20 season in 2018, before going to another level this year.

In 2019, Barty has been the game’s standout player. With her victory in Birmingham, she is currently on a 12-match winning streak, a run which also includes her stunning run to a first Grand Slam singles title at Roland Garros. Her 36-5 win-loss record includes three titles – the other being Miami – from four finals appearances. She’s also undefeated in Fed Cup play and is the only player, male or female, to be ranked in both the singles and doubles top 10.

.@ashbar96 is the 1st player to 3 titles this season, with all 3 coming on different surfaces. @MiamiOpen @rolandgarros #NatureValleyClassic pic.twitter.com/B6p6LyMfZ4

Now she’s the world No.1 – and likely to be the top seed for Wimbledon.

“I think the best thing is we’ve been busy,” she told tennis.com.au when asked how she has remained calm and focused amid this period of stratospheric professional success.

“We’ve been busy preparing for matches here, and that’s why we came here to Birmingham, to try and get matches to prepare as best as we can for the rest of the season. It’s been really nice just to be busy, and ultimately our preparations and processes stay the same, and it’s about enjoying it when we come out there.”

Here's a message for you from the new WTA World No.1, @ashbar96! 🏆#NatureValleyClassic#ItTakesWTA pic.twitter.com/WoMKPRboWg

Attaining a first major trophy, followed just two weeks later by the No.1 ranking, is a pair of achievements few players can lay claim to – especially in such quick succession. Barty described them as very different experiences, with the French Open triumph feeling “like a whirlwind”.

Yet with the 23-year-old immediately bound for her next tournament at Eastbourne, followed quickly by Wimbledon, she could easily be guilty of not permitting herself time and space to enjoy her various successes.

“It’s about celebrating those little moments along the way, making sure that we do sit down and take a breath and enjoy it,” she said, somewhat reassuringly.

“But also know that I’m still hungry for more success, and that’s what we’re after.”