Against the relentless Alison Riske, Ash Barty falls in three sets to exit the Wimbledon Championships in the fourth round. 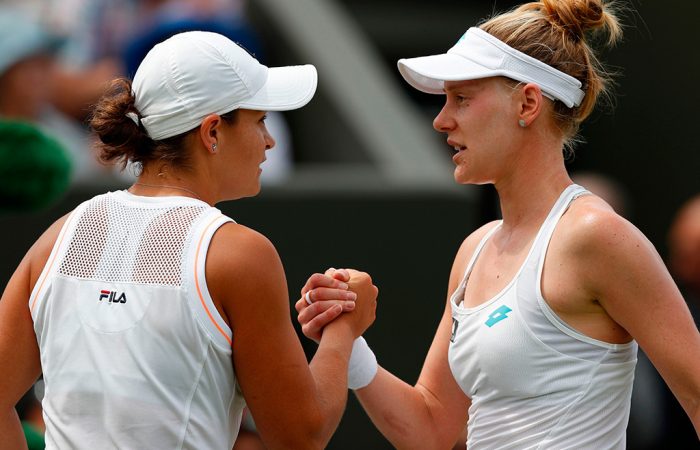 Ash Barty won the opening set on No.2 Court in a stellar start against Alison Riske.

Her streak of 21 consecutive sets won ended when the American stormed back to take the set.

“Tough one,” Barty replied when asked to assess the match.

“I started really well, was able to hit my spots. In the second set, I gave Alison too many looks at second serves. I know that my percentage was down. I wasn’t missing serves by too much. They were small margins. A miss is still a miss, and gives her an opportunity to have a look at a second serve.

“Overall I didn’t play a poor match. When I needed to, when the big moments were there, Alison played better today. Tough one to swallow, but I lost to a better player.”

Riske progresses to her first ever Grand Slam quarterfinal, where she will meet either Serena Williams or Carla Suarez Navarro.

And, having now beaten 22nd seed Donna Vekic, No.13 seed Belinda Bencic and top seed Barty at Wimbledon, she improves her record on grass to 14-1 in 2019.

All of those victories at the All England Club this year have come after she dropped the first set.

Apart from a lowly first-serve percentage, there was not a lot that Barty – appearing for the first time in the fourth round at Wimbledon – did wrong on Monday.

Her serve was a weapon in the opening set; it even delivered four consecutive aces in the very first game in a jaw-dropping start. Barty would go on to pound eight aces in the first stanza, which she wrapped up in 32 minutes behind 13 winners and just five errors.

A game of aces to start for Ash Barty!#Wimbledon pic.twitter.com/lvKqpyqxO2

But Barty’s serve fell away in the second set, with her first-serve percentage dropping to just 40 per cent and allowing Riske to dominate on the return.

“That’s probably one of the parts of my game today I’m disappointed with the most,” Barty reflected.

“But in saying that, it was just a bad serving day at times. Not always. There were times where it was still there, as well. But not to be.”

The American, growing in confidence, landed 71 per cent of her own first serves, smacked 10 winners while committing just two errors, and won eight of her 11 trips to net. She broke Barty twice en route to levelling the match at a set apiece.

From there, it was anyone’s match. And unfortunately for Barty, the weapons that have given her opponents fits all year long did not seem to have the same effect on the American.

Riske was not troubled by Barty’s slice; in fact, she seemed to thrive on its low trajectory, and fired it back with her flat groundstrokes to frequently turn points in her favour.

Barty had more success with her heavy forehand, but Riske rarely gave her an opportunity to set up for it, directing the majority of her shots to the Australian’s backhand and, when she did change it up, successfully getting Barty on the run and stretching for the wide forehand.

The world No.1 is incredibly adept at the net, but she was wary of Riske’s stinging passing shots. Instead, it was Riske coming forward far more often, winning 20 of 27 points (70 per cent) in the forecourt. Barty went to net 16 times, and won just half those points.

“There aren’t many holes in her game, full stop,” Barty said.

“Today at times when I really needed to back myself, the execution wasn’t quite there.

“You just have to look at her stats on a grass court to show just how dangerous she is. It complements her game well. I think today in the crunch moments, she came up with her best tennis. When her back is against the wall, she plays really well typically. She did that today. All credit to her.

“She deserves to be in the quarterfinals. She played a great match today.”

As the third set progressed, it was again the serve that proved Barty’s undoing. At 3-4, 30-30, she missed her first delivery, and Riske smacked an off-backhand second-serve return winner to earn break point.

With a forehand winner up the line, she converted it to push ahead 5-3.

In the final game, Barty edged ahead 15-30, only for Riske to rattle through the next three points and complete the upset.