Ash Barty is the new queen of women's tennis, ascending to world No.1 after her straight-sets victory over Julia Goerges in the Birmingham final. 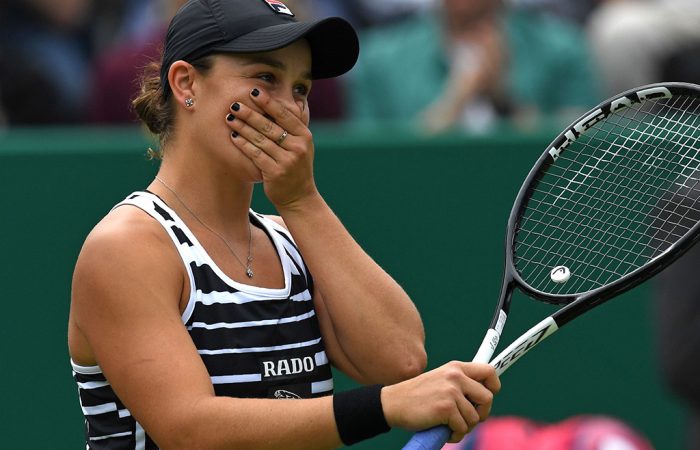 Ash Barty won the Nature Valley Classic in Birmingham on Sunday, a victory propelling her to world No.1.

Barty’s third title of 2019 came via a composed 6-3 7-5 triumph over good friend and doubles partner Julia Goerges in the final.

Barty, the French Open champion, did not drop a set all week in Birmingham and took her winning streak to 12 thanks to the one hour and 28 minute victory.

[email protected] is the #NatureValleyClassic champion and will be crowned World No.1! 🏆

“It’s just been the most incredible journey for myself and my team. You always dream of it (being No.1) as a little kid, but for it to become a reality is incredible. It really is.

“It’s not something that was even in my realm – this year we were aiming for top 10 and now to be where we are, it’s a testament to all of the people around me. I have the most incredible team of people who have been with me these last three years.

“We started from scratch three and a half years ago and now to be where we are, not only for me, it’s a a massive achievement for them.”

“@juliagoerges, I couldn’t think of a better person to share the court with.”

@ashbar96 commends her #NatureValleyClassic final opponent and discusses a match that has earned her World No.1 status!

She is the first Australian woman to rise No.1 since Evonne Goolagong Cawley in 1976, and just the fifth ever, also joining John Newcombe, Pat Rafter and Lleyton Hewitt as players who have reached the summit of the sport.

“To be able to follow in the footsteps of Evonne, even to be mentioned in the same sentence as her, is incredible,” Barty said.

She now heads to Eastbourne as she continues her build-up to Wimbledon, beginning on 1 July.

“It was a high quality match and Ash deserves the win.”@juliagoerges emotionally reflects on a brilliant #NatureValleyClassic final. pic.twitter.com/AwyzDXfoFM

Barty began the match by having to save two break points against Goerges, who was teeing off on the returns and troubling Barty with her pace of shot.

Barty eventually held, but then Goerges – who beat Barty in the second round in Birmingham last year – served decisively to quickly win the next game.

The Australian eventually began to work her opponent out and seemed less bothered by the German’s power. And with her wicked slice increasingly neutralising points, Goerges began to misfire.

Barty broke in the sixth game for a 4-2 lead and maintained that advantage for the remainder of the set.

The reigning Roland Garros champion will overtake the reigning US Open and Australian Open champion on Monday and also secures the provisional No.1 seed for @Wimbledon. pic.twitter.com/wbbRavHP1J

Goerges responded strongly, breaking Barty early in the second set and opening up a 3-0 lead.

Yet Barty reeled her back in, and the tennis that followed was the highest quality and most tensely fought of the day.

Urging herself on, Goerges arrived at set point in the 10th game – only for Barty to erase that with an ace out wide. Two crucial misfires from Goerges in the next game handed Barty a break, and a chance to serve for the match.

From there, she didn’t drop a point, capping a stunning week.