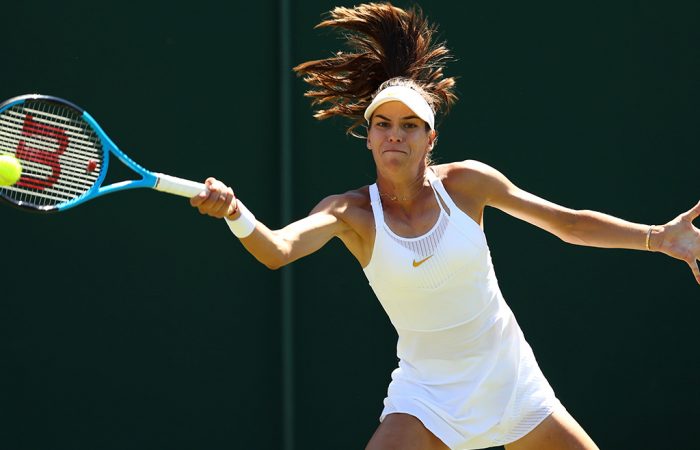 Ajla Tomljanovic is confident she can continue her fine 2019 form after progressing to the second round of Wimbledon for the first time in four years.

The Australian No.2 beat Russian 2018 quarterfinalist Daria Kasatkina 6-3 6-1 in impressive fashion on Monday.

Kasatkina, who reached the top 10 in October and ended Ash Barty’s Wimbledon campaign 12 months ago in the third round, was seeded 29th but struggled throughout against a fired-up Tomljanovic who sealed victory in just over an hour.

“It probably looked a bit easier than it was,” saidTomljanovic, who won eight straight games to take the first set and build a 4-0 lead in the second.

“First rounds are always tricky and I don’t think it was her best performance but I was able to take advantage and relieved I won.”

Tomljanovic is showing signs of replicating the Grand Slam form she showed when reaching the last 16 of the French Open as a 21-year-old.

She has posted three WTA finals appearances in the past 14 months and in April reached a career-high ranking of No.39.

The victory over Kasatkina was only her fifth first-round victory in her last 16 Grand Slam starts and the 26-year-old admitted it was a statistic that was starting to get to her.

“Wimbledon is always special and I think last year and this year I have had some pretty rough draws in the Slams,” she said.

“I’ve had a couple of tough matches so it was really good to get through to the second round.

“It’s just the first round … but overall I think the ceiling’s still high. But I’m glad with where I’m going and my path.

“I think I have a lot more to show and to keep building.”

Tomljanovic will face another tricky test in the second round when she will meet former two-time semifinalist Victoria Azarenka, who boasts an impressive 30-11 record at The All England Club.

Azarenka won the pair’s only previous encounter on clay in Madrid four years ago and Tomljanovic is fully aware of the challenge she faces against the former world No.1 and twice Australian Open champion.

“I think it’s actually a tough second round, after beating a seed,” she said.