Arina Rodionova storms back after the loss of the first set to reach the main draw at Wimbledon for the second time in three years. 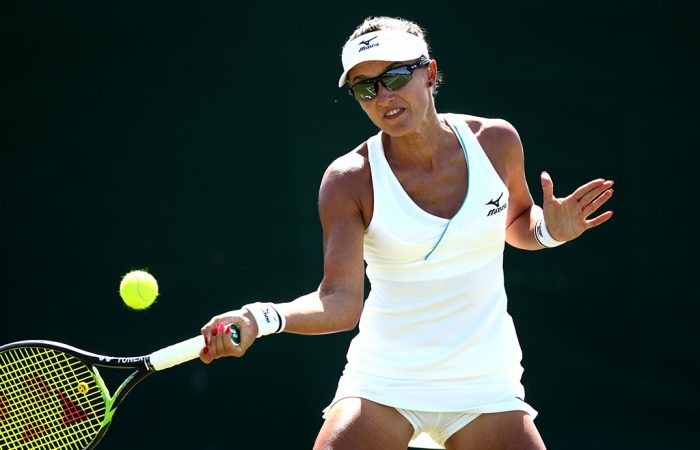 Arina Rodionova on Thursday rebounded from a first-set shutout to storm into the main draw of Wimbledon.

Playing American Danielle Lao, the Aussie did not win a game in the first set before recovering to win 12 of the next 14, earning her a 0-6 6-1 6-1 victory.

It followed on from her opening-round comeback at Roehampton, when she trailed 4-1 in the third set against Asia Muhammad before clawing her way to 7-6(6) 6-7(2) 8-6 win in a match lasting more than three hours.

She joined Alexei Popyrin as another Australian victor on a sunny Thursday in Roehampton; compatriots Jason Kubler and Andrew Harris fell in the final round.

“I just can’t win like a normal person, I need to make some sort of drama and action. You know, (I’m) all about spectators,” she laughed.

“Unfortunately it’s not such an uncommon for me to lose a set easy, because I don’t have a great serve and I feel like she’s the sort of player that it doesn’t matter how big your serve is, she’s gonna get it back anyway.

“I think she started really well. I was definitely fatigued after my match and she made me get down like really low to get her shots back, her slice, especially on the forehand, like I really struggled to get it going, and just felt my hips were a little bit tight.

“Then I started telling myself that she’s probably not going to play the whole match on that level. I thought she played amazing first set and she didn’t really give me any chances, and if she plays like this the whole match, then it’s too good.

“But it’s a hard thing to do. I think I started well second set, I held my serve first game in the second set, it was a really tough game, and then I felt like she took her foot off the gas a little bit. I was pumped for that (laughter).”

Back in the main draw! @arinarodionova defeats Danielle Lao 0-6 6-1 6-1 to punch her ticket to @Wimbledon #GoAussies pic.twitter.com/0fhq9vI1dt

Indeed, once Rodionova shrugged off the opening set and refocused for the second, she was by far the superior player.

She became accustomed to Lao’s unorthodox slice-and-dice style and ultimately had too much court speed, power and grass-court prowess for the world No.168.

“Just so happy to get that one – it means the world to me,” she said.

“It’s similar (feeling to 2017). I was pretty pumped two years ago, and today as well (smiling). I think two years ago I beat great players like (former world No.15 Kaia) Kanepi as well.

“This year was really tough – I didn’t feel like I had one round where I had a like a bit of a free ride, you know? My first one obviously was really tough and then fourth seed (in second round) and today. I feel like all three players were so different, like different styles of game and that’s what made it very difficult to adjust.

"The performance of the day!"

“Today I didn’t start my best but I’m just really happy that I stuck to the plan and managed to get through.”

When Rodionova qualified for the main draw in 2017, she saved a staggering seven match points to upset 16th seed Anastasia Pavlyuchenkova and reach the second round. She was the lone Aussie to progress that far at Wimbledon that year.

She doesn’t see a repeat of that scenario in 2019.

“I’m sure this year will be very different (to when I played in 2017). We have a field of (Australian) players that’s much better this year,” she said. “We have obviously Ash Barty who hopefully I think has a pretty good chance to win the whole thing.

“Playing main draw of a Slam, that’s what we play tennis for, basically.

“I have now a couple of days to maybe take off and recover and get my body ready for main draw and then just it’s another challenge and I’m very excited – I love playing there. Just take it one match at a time again.”