Arina Rodionova and Kaylah McPhee win within minutes of one another to join countrywoman Priscilla Hon in the second round of Wimbledon qualifying. 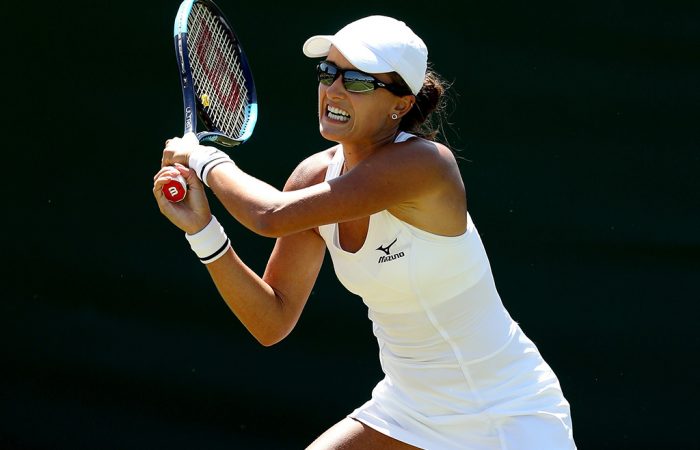 Arina Rodionova won an epic contest on Tuesday evening to advance to the second round of the Wimbledon qualifying tournament at Roehampton.

At almost exactly the same time, Kaylah McPhee defeated Britain’s Maia Lumsden 6-4 6-4 to get her first ever appearance at Wimbledon off to the perfect start.

Earlier on Tuesday, No.23 seed Priscilla Hon opened her campaign with a 7-5 6-3 win over Katarina Zavatska, her grasscourt weaponry and repertoire of shots proving decisive against the world No.197.

Rodionova, who trailed 5-2 in the first set and missed a match point in the 12th game of the second set on Muhammad’s serve, shared a warm embrace with her opponent after sealing victory.

“It was entertaining I guess, a lot of ups and downs. I’m just so happy to get this one,” she said.

“I’ve known Asia for a few years and we just played each other in doubles last week in Ilkley and so I had a fair idea of how she’s gonna play. But I had no idea how I was gonna play – it’s first round, everyone’s a bit nervous.

“Definitely this year I had a few tournaments where I was down and I managed to win the match. I think also against (Lizette) Cabrera one of the first weeks of the year I was down a set and 5-2 or something (in Launceston).

“It definitely gives me confidence that I know I can always come back and especially it’s kind of tough to close out the match – again, first round, nerves. So you’re always in there.”

After winning the first set, McPhee fell behind an early break in the second yet won six of the next eight games to set up a clash with No.31 seed Liudmila Samsonova.

“It’s really exciting. I was just excited to be able to play. I was working for a few months to get into the draw,” said the Queenslander, who is currently ranked No.227 after a career-best season.

“Just being here was a real pleasure – it’s like a really prestigious event, even qualifying, and to get the win is the icing on top of the cake.

“I thought I had a little bit of a slow start, I was a little bit nervous. I wasn’t quite timing the ball as well as I would like to. But I stayed pretty calm, and just worked through my processes and that got me back into the match.”

Serving for the first set, Hon twice faced break point before her big serve bailed her out. And with a break in hand in the second, she was down break point four times in the sixth game, but escaped with more forceful play to push ahead 4-2.

At 3-5, Hon played a dominant return game, dropping just one point to seal victory in under 90 minutes.

“I knew her from juniors a little bit. I feel she’s more of a clay-courter, she moves really well. She fights like crazy and even after the first point she’s saying ‘come on!’ already,” Hon said.

“Just had to be there every single point – if I wasn’t all there and 100 per cent (mentally) in it, all of a sudden it’s getting close again. There were a couple of games here and there when I was 40-15 up and it went to deuce really quickly.

“So just need to work on that for my next match. Just needed to back myself. It’s never easy, but it worked out well today. I felt pretty confident going in.” 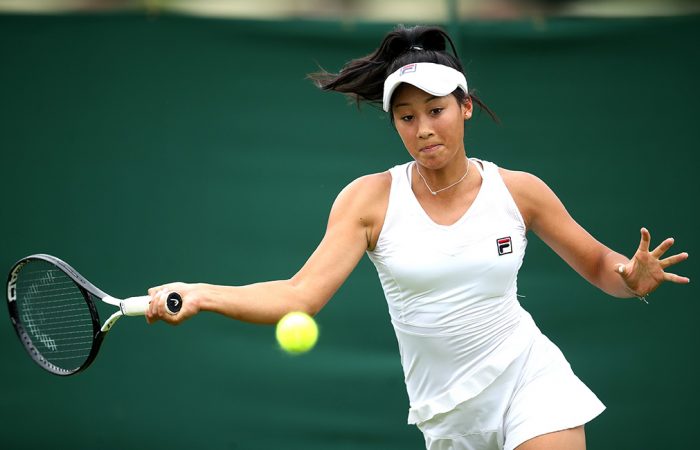 Hon played three grasscourt events in the lead-up to Roehampton, qualifying for the main draw at the WTA event in ‘s-Hertogenbosch.

She next faces American teen Caty McNally for a place in the final round.

“I didn’t really have a proper training before I went on the grass – I played the French and the week after I played my first grass-court match and I didn’t even get my (grass-court) shoes until the day of (the match),” she laughed.

“It was a bit all over the place but now I’m finally feeling comfortable on it.”

At the same time as Hon was playing, Destanee Aiava and Zoe Hives were also in action on nearby courts.

Aiava fell 7-6(3) 6-4 to Italian Martina Di Giuseppi, while Hives pushed No.2 seed Anna Blinkova, holding four set points in a marathon 10th game of the second set before going down 6-1 7-5.

Perez also fought hard, leading 4-1 in the second set and with break points for 5-1 against Elena Rybakina before the Kazakh out-steadied the Aussie to win 6-1 6-4.

Birrell, whose right elbow was heavily strapped, re-focused after Misaki Doi outplayed her in the first set and hit her way to a 4-0 lead in the final set.

Yet the Japanese lefty reeled her in, coming back to win 6-1 4-6 7-5 and setting up a second-round clash with Rodionova.