Kyrgios wins, then loses, at Queen’s

Nick Kyrgios wins his first-round match before losing later on the same day to Felix Auger-Aliassime on a big day of action at Queen's. 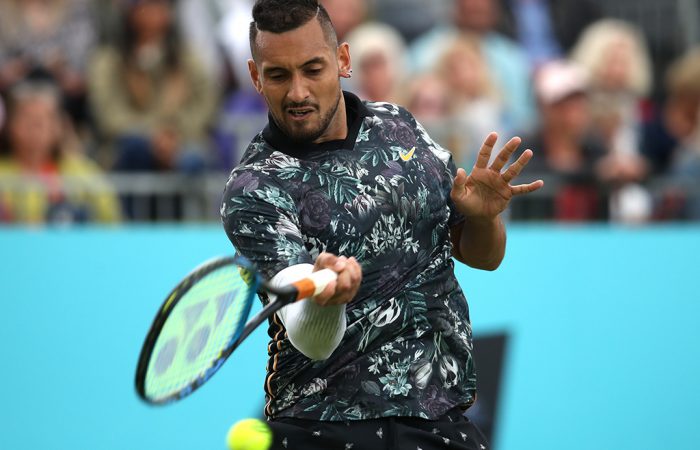 Nick Kyrgios experienced the highs of victory and the bitterness of defeat all on one intense day of action at Queen’s Club on Thursday.

In the early afternoon he scored a 7-6(4) 6-3 win over Spaniard Roberto Carballes Baena to advance to the second round of the prestigious grasscourt tournament in London.

However, in the early evening he fell in three tight sets to Felix Auger-Aliassime, narrowly missing out on a place in the quarterfinals.

Auger-Aliassime, who like Kyrgios was also forced to play his first-round match earlier in the day, progresses to a meeting in the last eight with No.1 seed Stefanos Tsitsipas.

Faced a total of two break points in five sets. Didn't get broken.

Kyrgios was originally scheduled to play Adrian Mannarino on Tuesday.

Yet Mannarino pulled out of the tournament with a finger injury, and was replaced in the draw by lucky loser Carballes Baena of Spain.

Rain washed out the entire Tuesday schedule of play, and only some matches were completed on Wednesday, pushing Kyrgios’ first outing to Thursday.

After missing four set points on Carbelles Baena’s serve across the 10th and 12th games of the first set, Kyrgios played a delightfully creative tiebreak to take an early lead. He then broke serve twice in the second set to wrap up victory.

Emerging again several hours later, Kyrgios faced similarly big-serving Auger-Aliassime, and the match was completely dictated by the serve – there was just a single break point, which went unconverted, in the first two sets combined.

The third set looked destined to go to yet another tiebreak until Auger-Aliassime unexpectedly arrived at match point in the 12th game.

He converted with a crosscourt backhand return winner past a net-rushing Kyrgios to advance with a 6-7(4) 7-6(3) 7-5 win.

Kyrgios, who reached the semifinals at Queen’s this time last year, is expected to fall four places to world No.43 in next week’s ATP rankings.