De Minaur and Popyrin knocked out of French Open

Alex de Minaur and Alexei Popyrin are both beaten in the second round of the French Open on Wednesday. 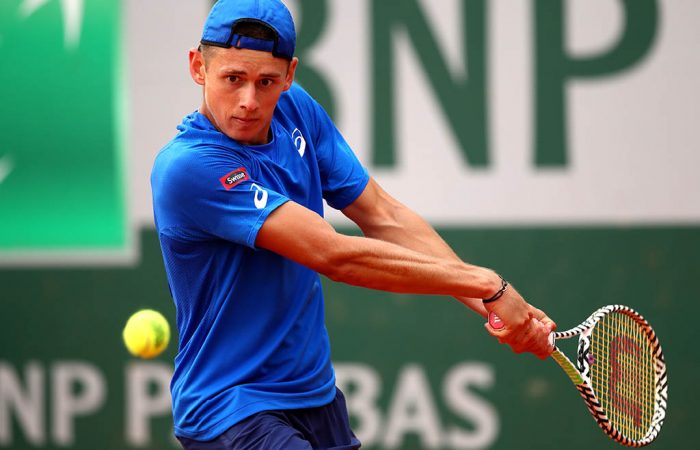 Alex de Minaur and Alexei Popyrin both promised to come back stronger after defeats at the French Open on Wednesday.

The pair suffered on the red clay, leaving Jordan Thompson as the only Australian man remaining in the singles draw – he plays Ivo Karlovic in round two on Thursday.

Ash Barty, Sam Stosur and Priscilla Hon will hope to reach round three in the women’s draw.

De Minaur had snapped a five-match losing streak in the first round but was no match for Spain’s Pablo Carreno Busta in the second round, going down 6-3 6-1 6-1.

Popyrin enjoyed his first main-draw win in the opening round but was beaten 6-4 7-6(4) 6-4 by Serbian 31st seed Laslo Djere on Wednesday.

Carreno Busta, a one-time quarterfinalist at Roland Garros, won the first nine points against De Minaur and had an answer for everything the Aussie tried after that.

De Minaur is still forecast to rise to a career-high No.23 and the ambitious talent is already thinking about returning bigger and stronger next year.

“I do feel like I’ve got the game to play on clay,” he said.

“The great thing about it all is there is a lot of improvement to be done … there’s a huge gap. It probably would be a good thing if I bulk up a little, but that’s all in the plan.

“A lot will change, hopefully no more injuries, a stronger body and I’ll become a little bit of a claycourter.”

“You can just tell by looking at both of us,” said De Minaur of the physical differences between him and the 27-year-old Spaniard.

However, having started last year outside the world’s 200, the Australian was not disheartened.

“I’ve always known that I’m never going to be the tallest or biggest guy but I’ve been able to accomplish amazing things with what I’ve got.

“Now it’s time to keep improving, keep finding ways to play my game style and be more effective on clay.”

Popyrin also vowed to learn from the losses in the infancy of his career after the 19-year-old wildcard’s maiden French Open campaign ended in the second round.

Only 12 points separated the Australian from the tournament’s 31st seed, a proven clay performer who had dedicated a maiden title to his late parents earlier this year.

The 23-year-old Djere (33 winners and 18 errors), simply played better on the big points in the two hour and 15 minute contest.

Impressively calm and composed in just his third Grand Slam event, Popyrin offered little more than a shake of the head and wry smile when his opponent’s quality could easily have got the better of him.

“I can gain confidence from this; I played well today, even though I lost,” he said, adding that he needed to impose himself more on the decisive points.

The big-server is forecast to leave Paris at No.103 in the world, just inside automatic Grand Slam qualification.

This time last year Popyrin, who made the third round at the Australian Open in January, was ranked No.393.

“Every match I play on this level will give me more and more belief that I can play, no matter if I win or lose,” he said.

In doubles, Aussie pairings Matt Ebden and John-Patrick Smith, and John Millman and Jordan Thompson went out, along with Astra Sharma and Storm Sanders in the women’s doubles.

There was a victory for Ash Barty alongside Victoria Azarenka over fellow Australian Ajla Tomljanovic and Serbia’s Aleksandra Krunic.