Ash Barty and Jordan Thompson are through to the French Open third round for the first time, while Priscilla Hon fights on against Madison Keys. 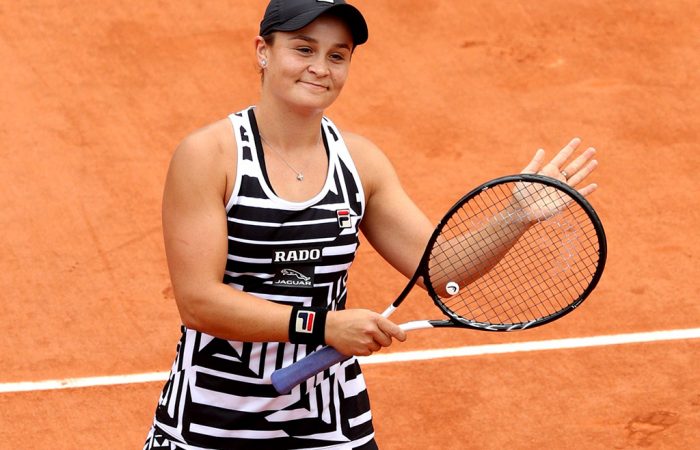 Ash Barty is knocking on the door of the world’s top five after booking a career-best third round showing at the French Open.

Entering the Slam at a high of No.8 in the world, even a loss to Danielle Collins would have seen Barty jump provisionally to sixth ahead of Wimbledon in July.

Barty can better that thanks to a gritty 7-5 6-1 win on a damp, cold Paris afternoon that continued the Australian’s impressive 2019 run.

Thompson had lost a dramatic match to the Croatian, now 40 years old, at Roland Garros three years ago but made just five unforced errors this time in a two-hour-31-minute contest as he calmly picked his moments against the 206cm veteran.

“It’s so hard to play someone like that,” said Thompson.

“I did keep focused most of the time – there were lapses – but I thought my mental effort was pretty good.”

Priscilla Hon could yet provide another landmark win for the Australian contingent in Paris after recovering to level at 5-7 7-5 against 14th seed Madison Keys when play was suspended for the day, but Sam Stosur’s hopes ended earlier in three sets against Ekaterina Alexandrova.

[email protected] is through to the 3️⃣rd round at @rolandgarros for the first time in her career 👏
–> https://t.co/y3NlGdnkVA pic.twitter.com/wubgPYKN6I

A champion in Miami earlier this year, Barty was also a quarterfinalist at the Australian Open and is destined to carry a new career-high ranking onto her favourite grass surface next month.

The 23-year-old played the part of a top-five star, weathering the Australian Open semifinalist Collins’ best blows in a see-sawing first set before executing a clinical finish in just under 80 minutes on court.

“I knew that I needed to be better than I was in my first round, and overall it was a much better performance,” said Barty.

“When I needed to, I served well and I was a little bit smarter with where I served on those bigger points and was able to get myself back in control.

“I think ultimately that’s what we’re after, when you’re in the big points and the big moments, to come up with your best tennis.”

Collins broke Barty twice in the first set but at 6-5 Barty amplified the pressure to gain the ascendancy.

She then saved three break points early in the second set in what proved a crucial hold.

Collins all but handed Barty the decisive break with two loose errors in the next game and soon after were they shaking hands.

Barty will play German Andrea Petkovic in the third round, while a likely encounter with Serena Williams is still on the cards in the round of 16.

Stosur’s decade-long French Open run was halted by powerful Russian Alexandrova in the second round.

The Australian had made at least the third round in her last 10 visits to Roland Garros, a streak only matched on the Paris clay among active players by Maria Sharapova.

She looked set to extend that record after racing to a one-set lead before the world No.58’s booming groundstrokes found their range in a gutsy 3-6 6-1 6-4 win.

“I hit the ball very well, hung in there and did everything I could,” she said.

“You get through that and you’re in the third round of a Slam and everything feels better again. I don’t feel like I’m that far away, but you’ve still got to do it.”