Ash Barty wins her 11th straight match - this one over Yulia Putintseva - to progress to a quarterfinal meeting with Simona Halep in Madrid. John Millman falls to Fabio Fognini in the men's event. 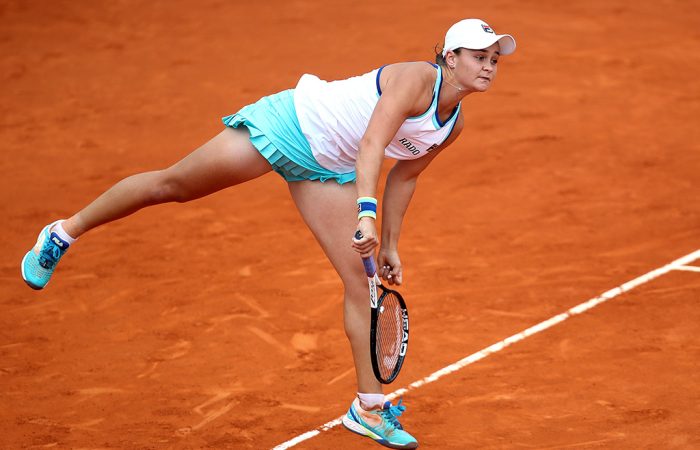 Australian No.1 Ash Barty has extended her hot streak to 11 straight wins to reach her fourth quarterfinal of the year after beating Yulia Putintseva in the Madrid Open.

The Miami Open champion continued her fine form by fighting back from a set down to overcome her Kazakh opponent 4-6 6-1 6-2.

In the concurrent men’s event, John Millman went down 6-2 6-2 in the second round to Fabio Fognini, who is now on an eight-match winning streak after also scooping the Masters title in Monte Carlo.

In doubles, Sam Stosur won her second-round match with Zhang Shuai over Maria Jose Sanchez Martinez and Sara Sorribes Tormo 1-6 6-3 [10-6], while John Peers and Henri Kontinen exited at the same stage in a match tiebreak against Guido Pella and Joao Sousa.

Barty’s win sets up a showdown with reigning Roland Garros champion Simona Halep in what will be her maiden Premier clay quarterfinal appearance.

[email protected] continues her fine 2019 at the @MutuaMadridOpen

Victory over the Romanian former world No.1 would represent another huge scalp on what the Queenslander admits is not her favourite surface less than a month before the French Open gets underway.

Admitting she will be up against it against Halep, Barty said: “It’s the absolute test, to play against the best.

“I think without a doubt she’s the best, most consistent clay courter out there. We had a quality practice session earlier this week. It was nice, 1st time we’ve hit together, and it was a really good level.”

Barty could rise to No.8 in the world rankings this week, making a top-eight seeding at Roland Garros a distinct possibility.

Her overall record this season is now 23-3, losing just once since her first Grand Slam quarterfinal run at the Australian Open in January.

Halep earlier defeated Viktoria Kuzmova of Slovakia 6-0 6-0, taking just 44 minutes to advance despite the appearance of rain and the court’s roof having to be closed.

Barty on Halep: “It’s the absolute test, to play against the best."

“I think without a doubt she’s the best, most consistent clay courter out there. We had a quality practice session earlier this week. It was nice, 1st time we’ve hit together, and it was a really good level.”

“(The roof) was good for me because the game was faster and I could play my best style. I think everything went very well for me today. I felt the ball, every single shot,” Halep said.

Petra Kvitova, Madrid champion in 2018, beat France’s Caroline Garcia 6-3 6-3 to set up a re-match of last year’s final with Kiki Bertens in the quarter-final.

Top-ranked Naomi Osaka reached the quarter-finals with a 6-2 6-3 win over Aliaksandra Sasnovich and will next face Belinda Bencic, who beat Kateryna Kozlova 6-0 6-2.

Stephens will meet Petra Martic, who earned a second walkover in a row when her compatriot Donna Vekic retired in the third set of their match.