With plenty of singles and doubles options at her disposal, Alicia Molik is confident in her team's chances going into Day 2 of Australia's Fed Cup semifinal against Belarus. 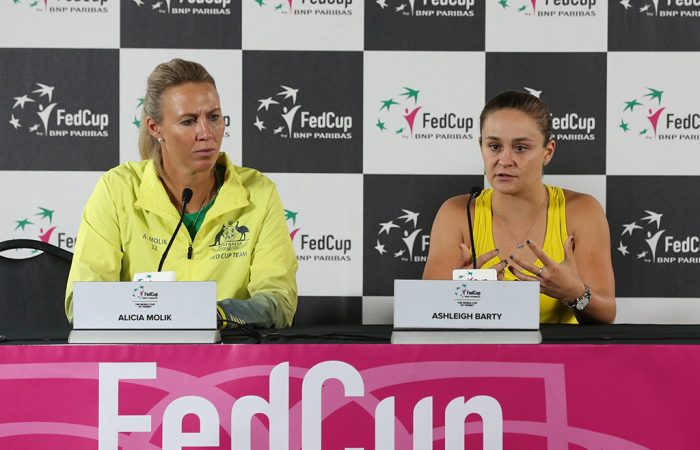 “It would be so amazing to be sitting here in the winning position tomorrow,” she said.

Molik was speaking to the media after Ash Barty’s straight-sets win over former world No.1 Victoria Azarenka at Pat Rafter Arena in Brisbane; scores in the semifinal tie between Australia and Belarus are currently locked at 1-1 after Aryna Sabalenka pipped Sam Stosur in the tie’s opening rubber.

Molik was thrilled with both Barty’s and Stosur’s performances when asked to assess the opening day’s play.

“Not (happy) so much because of the numbers – we’re sitting at even. But I was just so pleased and happy for Ash’s output today,” Molik said.

“It’s tough, coming in and playing in front of your home crowd, the expectation needing to win; (she) just handled it like another first-round match, it was fantastic.

“And then from Sam – I could not have asked for more. It’s the best I’ve seen Sam play at home for a long time, it was brilliant. Just maybe two or three points away from that match being turned on its head, and Sam having the win.

“It was a brilliant match and well fought, well deserved from Sabalenka.

“We’re used to this position, it feels really familiar. And I think we can get ourselves out of it.”

So how will Australia go about doing that?

Barty is expected to open Sunday’s play against Sabalenka in a battle between the two nations’ No.1 singles players, who both happen to be in the top 10.

Stosur is currently scheduled to face Azarenka in the second of the reverse singles, before teaming up with Barty in the doubles rubber against Vera Lapko and Lidziya Marozava.

But Molik hinted that these selections we not set in stone.

“I think it’s just a matter of having a chat to (Stosur) about how she feels for tomorrow. Dasha, too, has prepared well. Those two players, and I and Nicole Pratt will get together and have a pretty open and honest discussion. Players need to be included – this is a team thing,” Molik explained.

“I see a lot (in Barty and Stosur as a doubles combination); they practised this week together. And also Ash and Pri. So we’ve worked on a lot of doubles patterns, they’re very familiar with how each other play in terms of their strengths, what they like to use on the doubles court.

“Pri was awesome, though, in Asheville, she was phenomenal. First Fed Cup tie, live rubber.

“We’re not calling it just yet – there are a number of factors. Two players just walked off from pretty physical matches. So I think that’s going to count too, how bodies pull up later tonight.”

Barty, for one, was looking forward to a return to the court.

A new face in the top 10 and now riding a 12-match winning streak in Fed Cup play, the Queenslander was relishing the prospect of a big day of action on Sunday at Pat Rafter Arena.

“This is why we train and prepare and play – we wanna get down to crunch time and where we can compete, go out and enjoy it, love what we do,” she said.

“And in doing so, wearing the green-and-gold is pretty special.”