In a high-intensity battle spanning almost three hours, world No.10 Aryna Sabalenka eventually got on top of Sam Stosur to give Belarus a 1-0 lead over Australia in Brisbane. 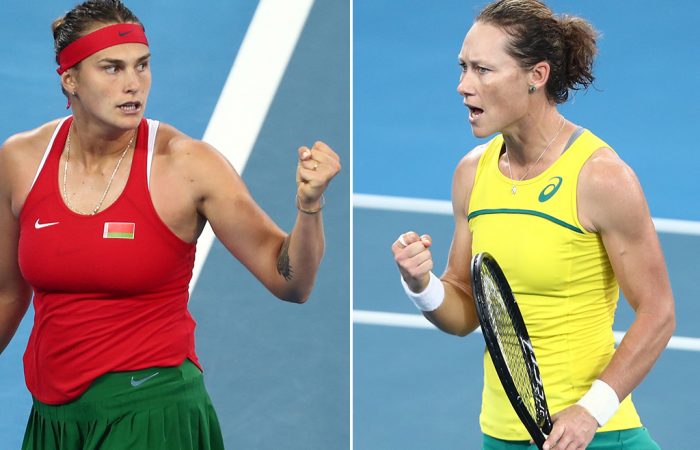 Sam Stosur stretched world No.10 Aryna Sabalenka for two hours and 47 minutes at Pat Rafter Arena before the Belarusian finally secured a three-set victory on Saturday.

In a high-octane battle, Sabalenka eventually got the better of the Australian 5-7 7-5 6-3 to put Belarus ahead 1-0 in their World Group semifinal tie.

Ash Barty will meet Victoria Azarenka in the second singles rubber, hoping to level the tie at the conclusion of the day’s play.

Stosur and Sabalenka had met once previously, with Sabalenka dropping just five games in a commanding performance at New Haven in August last year.

Yet this contest was far tighter – and more intense.

“We are so happy to start our day with a win,” Sabalenka said.

“I did my best – she played an unbelievable level. I was just trying to handle her level because she played really aggressive and really quick. It was a great match and enjoyed every minute on the court.

“I’m (feeling) good – I played a lot of matches in three hours so I kind of know how to recover after that (laughter). Hopefully I’ll play better tomorrow, so we’ll see.”

All class from Aryna 👏

Stosur agreed with Sabalenka’s assessment of the match.

“Obviously disappointed not to get through that one and win it, but I don’t think there’s a lot I could necessarily change or do differently,” she said.

“So I’m really proud of the performance I put on out there and the way I played, I really enjoyed the moment, and was totally enjoying the crowd and really into it.

“I think it was a really good match – unfortunately I came off second best, but there’s not much to be ashamed of.

“I hit the ball well, I hit it hard, I did what I wanted to be doing, and I think a couple of moments in that third set she came up with some pretty clutch returns and little pick ups, and that’s why she’s top 10.”

“Thank you to Sam, I think she played unbelievable. It’s all about a few points and just about the fight.” – @SabalenkaA #AUSBLR #GoAussies pic.twitter.com/EQtjxvxTFk

Stosur scored the early advantage with a break in the third game, only to hand it back with several double faults in the fourth game.

The two women traded breaks from that point until the seventh game, when Sabalenka bucked the trend with a hold for 4-3.

And from there, the set was a tense, tightly-contested affair, with Sabalenka and Stosur each wresting control of the momentum only for the other to muscle her way back into the contest with bold hitting under pressure.

Stosur broke serve in the ninth game and served for the set; despite saving two break points with a winning overhead and serve, Sabalenka broke back to level at 5-5.

Stosur held three break points in the following game, yet the Belarusian saved them all with high-quality play and went on to hold.

Another see-sawing game followed, with Stosur saving a bundle of set points before Sabalenka finally converted on her fifth – ending a 63-minute first set.

Sabalenka, swinging more freely, opened a 2-0 lead in the second set; it was now five games in a row against an understandably dejected Stosur.

Yet the Aussie re-set, tightened up her wayward backhand and loosened up on her forehand wing, churning through three straight games of her own to lead by a break.

It was the first of seven consecutive breaks in that second set – but that was not a knock on the quality of the match.

Both women were playing ultra-aggressive and intense tennis from the baseline, with multiple winners contributing to a pulsating atmosphere inside Pat Rafter Arena.

There were errors, too, but many of them were forces as both Stosur and Sabalenka attained great depth with their groundstrokes.

Stosur served for the set at 5-4, and despite holding a set point could not convert it. On her second opportunity – serving for the set at 6-5 – she grabbed it, powering a first serve that Sabalenka couldn’t control and levelling the match at one set all.

“In the first set it was a lot of pressure on me, and I think on her too, so I think we didn’t show our best tennis. And after first set I think we both like — I think we make decision, well, OK, so it’s a battle, and we need to enjoy it, otherwise we are going to lose it,” Sabalenka said.

“In just one moment I started enjoying this battle, and everything started going on my side, so I think that was the key.”

Stosur saved two break points in the fourth game of the third set, but Sabalenka responded by pounding two forehand winners to take a 3-1 lead, which she quickly extended to 4-1.

The Aussie fought valiantly to stay in the match, but Sabalenka’s lead – and momentum – was now too great.

Despite the loss, Stosur was focusing on the positives.

“I think that’s probably the best I’ve played out here (at Pat Rafter Arena),” she said.

“I think given the atmosphere and what you’re playing for and everything, that was a nice one to have for the memory bank.

“There’s still that element of disappointment, but you’re playing a quality player.”