Back inside the top 200 and targeting new highs in 2019, Destanee Aiava says a return to Australia's Fed Cup team for the first time in a year is one of her primary goals. 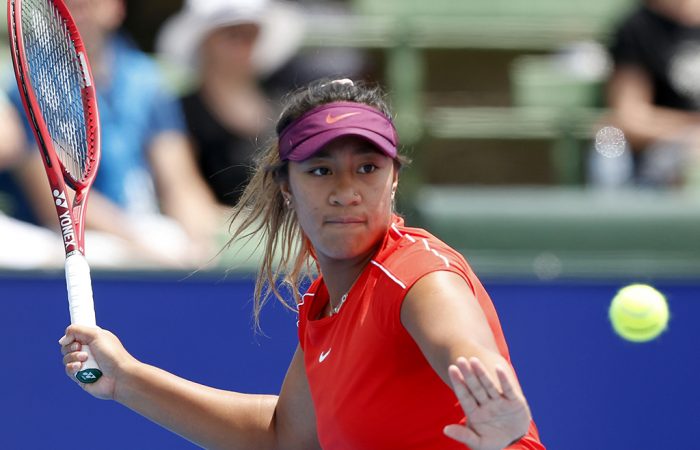 For 18-year-old Destanee Aiava, her tennis goals in 2019 are clear and simple.

Play bigger tournaments to boost her ranking and transition to a higher playing level.

And get back on the Australian Fed Cup team.

Aiava, one of the nation’s brightest tennis prospects, has already boosted her ranking back inside the top 200 after beginning 2019 at No.247.

She is trending in the right direction as she prepares to head to the United States for a swing of tournaments on green clay in the lead-up to the French Open.

But hopefully, there will be a return trip to Brisbane on 20-21 April for Australia’s Fed Cup World Group semifinal against Belarus. She last featured in the green-and-gold squad in April 2018, when Australia defeated the Netherlands in Wollongong to qualify for the 2019 World Group.

“It was good to see different Aussie players in the team,” said Aiava, who watched on television as Australia beat the United States 3-2 in North Carolina in the first round in February.

“It was probably, like, bittersweet, I guess (laughter). Because there’s a lot of competition in getting into the team and getting our results to be able to be in contention for the team. I guess having a lot of girls to choose from is a really good problem to have.

“It probably makes me even hungrier to want to be in the team again, because I really enjoy the Fed Cup weeks. And to have an opportunity to play for my country again. The bittersweet feeling is natural – everyone wants to play for Australia.”

This season has been one of mixed results for the Victorian.

She began it with a bang when she won three rounds of qualifying to reach the main draw of the Brisbane International; she would go on to reach the second round, where Naomi Osaka eventually stopped her at Pat Rafter Arena.

A double fault and that's victory for the Aussie!

Yet Aiava went on to lose four of her next five matches as she struggled to reproduce that form. She said she enjoyed the experience of playing Madison Keys at Rod Laver Arena – a first-round match she lost 6-2 6-2 – and that the Aussie summer taught her some valuable lessons.

“I think coming from Brisbane into Sydney I put probably a lot of pressure on myself to do well again, because I did so well in Brisbane, beating players that I’d never beaten before, so that extra pressure kind of played in a little bit,” she admitted.

“But I think just going back to the drawing board and learning how to come back after a big run in a tournament like that, and just backing up in smaller tournaments is another goal of mine that I’ve been working on.

“Just playing each tournament as equal at is – it doesn’t matter how big or small the tournament is, just to keep backing up. And probably not putting so much expectation or pressure on myself, and thinking I need to win the match.”

After reaching the quarterfinals on grass at last week’s Mildura Grand International, Aiava will target a pair of clay-court Pro Tour events in Canberra before jetting off to the US.

She comes into this portion of the season with the hard work of a solid training block under her belt, which she completed in Sydney in late February.

“At the top level that I’m transitioning to at the moment, they’re very physical and they’re all quite fit. So in order to keep up with that – especially on the road, for months at a time – it’s pretty important for me to get that fitness up, so I won’t be breaking down or tired as the weeks go by,” she explained.

“The goal is to player higher tournaments this year – some more WTAs and more (ITF) 100s as opposed to 25s. So going to America is probably the best option for me … for me to get more points and to lower my ranking for the bigger tournaments. And just to get more matches at the level as well, so it will prepare me better for big tournaments like Grand Slams and the WTAs leading up to them.

“I would love to get into the top 100 this year. Last year was a bit rocky with my results, but I feel like I’m definitely in apposition to achieve that this year.”