Fed Cup a goal for Fourlis

Victorian teenager Jaimee Fourlis, once a Fed Cup Orange Girl, says she would love to represent Australia as part of the playing squad. 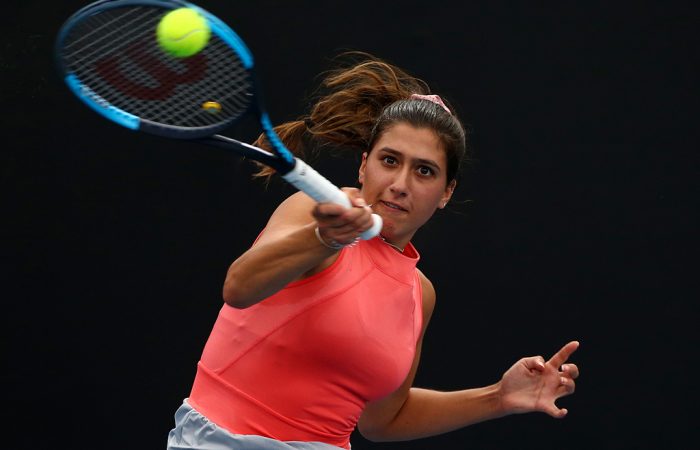 Jaimee Fourlis’ selection as Orange Girl for Australia’s Fed Cup World Group II Play-off tie against Serbia two years ago was something that left her inspired.

To this day, one of the teenager’s main goals is getting a call-up to the squad as a playing member to represent her country.

“Being in the team situation is the best thing ever,” Fourlis told tennis.com.au.

“In tennis you’re always individual, but being surrounded by Ash (Barty) and Dash (Gavrilova), at the time Casey (Dellacqua) was playing, and just being around Pratty (Fed Cup coach Nicole Pratt) and Mol (Fed Cup captain Alicia Molik) and everyone in the team, it’s a joy, the energy that you feel. And it makes you want to get better every day.

“You carry a lot of positive energy and wanting to get better because you’ve seen the level that Ash and Dash play at, and Case and all these girls, and it makes you want to get to that level even quicker, and to be able to play for Australia and to play Fed Cup.”

With the Fed Cup team preparing for a World Group semifinal against Belarus on 20-21 April, Fourlis is one of a growing band of young Australian women who look ready to challenge for places in future.

She has enjoyed a brief-yet-impressive professional career, winning her first ever Grand Slam main-draw match on debut at Australian Open 2017 and pushing Caroline Wozniacki to three sets in the opening round of Roland Garros four months later. She has also won three titles on the ITF circuit.

In her first full season on tour last year after graduating from high school, the Victorian peaked at 189th in September 2018, not long after advancing to the final round of US Open qualifying in New York.

Since then, wins have been harder to come by, but the 19-year-old is treating her journey on the professional circuit as an ongoing learning experience.

“It’s been interesting. There’s been a lot of highs and lows so far,” Fourlis said of her 2019 season.

“We’re only two months in, so I’m trying not to base how I’m feeling on the two months alone. I had a great Aussie summer – I was able to play qualifying of the Australian Open and got in on my own ranking, which was another really good experience.

“Then I went to (ITF events in) Launceston and Burnie and didn’t go too great there, but definitely learned a lot, and now we’ve started our training block before the clay-court swing, and hopefully then I’m off to Europe.”

During that training block in Melbourne, Fourlis worked on developing her strength – with a focus on building speed and movement on court to better set up for shots – and honing technical elements in her game.

With her ranking currently at No.241, she will play Pro Tour events in Mildura and Canberra before targeting 25K and 60K European ITF events.

“I think this is the best schedule for me because I really enjoy the clay,” she said.

“I’ve kind of shown that I can play on the clay and it’s something I really enjoy and I’ve grown up playing on it, so it’s not very foreign to me.

“I’m getting familiar with the tour and starting to play my brand of tennis, and (a goal of mine is) hopefully breaking into the top 150 by the end of the year or by the Australian Pro Tours in September.”

A smiling Fourlis added: “I never like to put a number on it, but there always has to be a number.”