Nick Kyrgios saves three match points to beat No.1 seed Rafael Nadal in a stunning second-round match under lights in Acapulco, becoming the third Australian through to the quarterfinals. 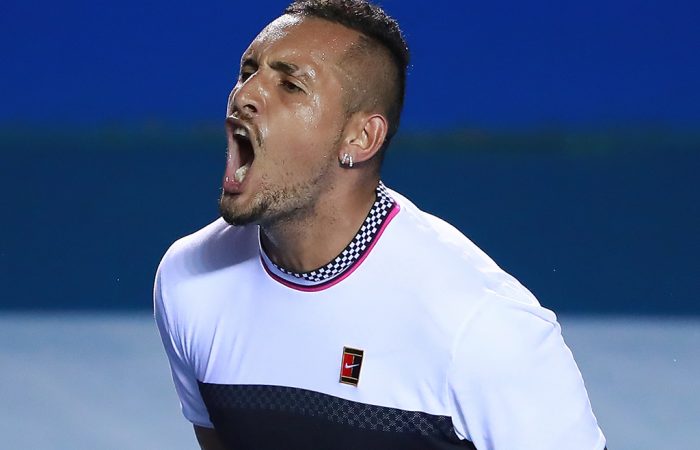 Nick Kyrgios has staged a stunning turnaround to defeat Rafael Nadal and reach the quarterfinals of the ATP 500 hard-court tournament in Acapulco.

Kyrgios saved three match points in the final-set tiebreak to beat the No.1 seed 3-6 7-6(2) 7-6(6) before an atmospheric crowd on Wednesday night local time.

The victory sees Kyrgios level his head-to-head series against Nadal at 3-3 and makes him the third Australian to reach the last eight in Acapulco.

Earlier in the day, John Millman thumped Peter Gojowczyk while Alex De Minaur advanced when opponent Feliciano Lopez withdrew from their match because of illness.

Time and time again throughout the three-hour, three-minute contest, Kyrgios found himself facing batches of break points, only to serve his way out of trouble.

In the ninth game of the second set, Nadal built a 0-40 lead and earned a fourth break point later in the game; had he converted any, he would have served for the match leading 6-3 5-4.

Serving at 2-3 in the final set, Kyrgios again trailed 0-40 and would ultimately face five break points, before holding for 3-3.

Nadal appeared to have found an extra gear in the final-set tiebreak, moving superbly and dominating the baseline exchanges to move ahead 6-3.

Yet Kyrgios saved the first two match points with some inspired play – the second with a drop volley that clipped the tape and died on Nadal’s side of the net – before the Spaniard narrowly missed a backhand up the line on his third.

Kyrgios would win the final five points of the match – assisted by a Nadal double fault at 6-6 – to record a famous victory.

Next up for Kyrgios is a meeting with former world No.3 Stan Wawrinka.