Alex Bolt performed admirably but lacked some consistency in a straight-sets loss to Alexander Zverev in the third round of the Australian Open on Saturday night. 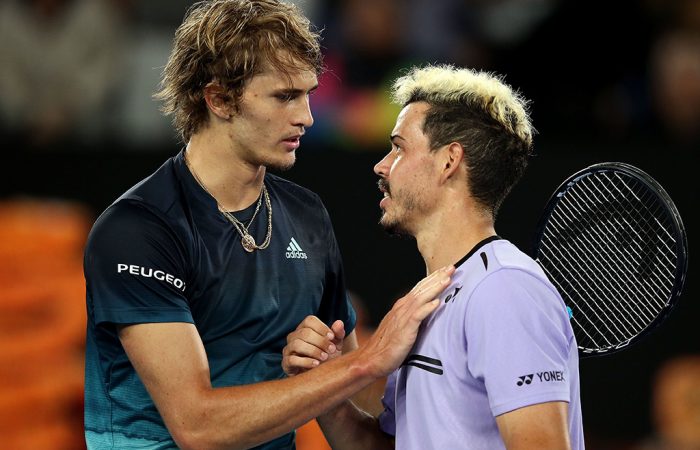 Alex Bolt’s exciting run at the Australian Open hit a road-block on Saturday night in the form of world No.4 Alexander Zverev.

The South Australian wildcard couldn’t match the German star in their third round meeting on Rod Laver Arena, falling 6-3 6-3 6-2.

Ranked world No.155, Bolt wasn’t in the same league as Zverev, who is leading the charge of Generation Next.

But the 26-year-old, who walked away from tennis for nine months three years ago, had plenty to be proud of.

"He's someone who has unbelievable power. All the credit to him – he's played an unbelievable tournament. All the best to him. I think if he continues playing the way he's playing, he's gonna be top 100, top 50 maybe."#AusOpen pic.twitter.com/0YAc2JDdhu

“(It was) unbelievable to play a match on Rod Laver. Growing up as a kid, it’s always something I dreamed of doing,” Bolt said.

“To do it out there, not just on Rod Laver Arena, but with Rod Laver in the crowd, that was pretty special.

“I thought my level was definitely there, but it’s just the consistency that wavered for me. I felt like my game is definitely there. It’s just I need to be able to maintain that for longer periods of time, then I think I’ll be all right.”

Bolt captured the public’s imagination in a rousing five-set win over former world No.6 Gilles Simon that followed a maiden Grand Slam victory in round one.

He produced some clever serving, including nine serve-volleys, to keep Zverev on his toes and pulled off some big forehand winners.

But too often Bolt let himself down with unforced errors – 38 for the match – to take the pressure off the lanky German.

Zverev said he was surprised by Bolt’s power game and predicted he could quickly move into the top 100.

On the back of his Australia Open heroics he is projected to climb to No.127.

“He is someone with unbelievable power, and I was surprised actually how much power he has, especially in the cold conditions,” Zverev said.

“He has played an unbelievable tournament and I think if he continues playing the way he is playing, he will be top 100, top 50 maybe.”

Bolt was pleased when Zverev’s comments were relayed to him during his press conference.

“Obviously it’s good for me to hear something like that from a top guy, he thinks I have potential to crack the top 100, then 50,” he said.

“That gives me a lot of confidence in my game.”