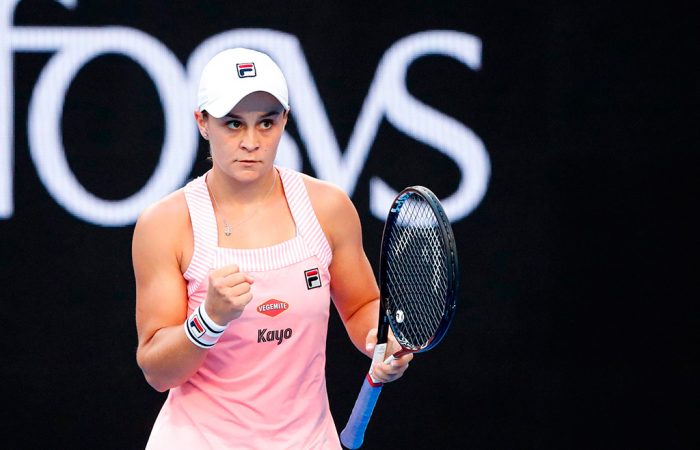 Top-ranked Australian Ash Barty has continued a green-and-gold day to remember at Melbourne Park, routing Luksika Kumkhum to move into the Australian Open second round.

Barty, the 15th seed, defeated her Thai opponent 6-2 6-2 on Margaret Court Arena to set up a date with China’s Yafan Wang on Wednesday.

One two punch, and she is through!

Second round for Ash Barty? ✅
Less than one hour? ✅

The 22-year-old Barty took just 58 minutes to progress, but it didn’t start so easily for the Queenslander, who shocked a patriotic crowd by dumping her opening service game to go 0-2 down.

But her response was swift and emphatic; she raced through the next six games for the loss of just nine points to claim the set.

She won plenty of points at the net and found her rhythm from the baseline.

Having claimed a decisive break in the second set’s fifth game, Barty charged on to finish her first-up assignment in less than an hour.

“We’ve split the last times we’ve played so I knew I had to be ready,” she said. “We’re always edgy to start competing.”

Barty is aiming to become the first Australian woman to lift the Daphne Akhurst Memorial Cup since Chris O’Neil 41 years ago.

Barty said she wouldn’t be looking past her next match.

“I want to make sure for myself I prepare well so I can come out here and play with freedom and hopefully win a few matches,” she said.

“There’s a very very long way to go. I’ll think ‘why not me’ on Wednesday and then we’ll go from there.”