Polmans set to take the next step

After a career-best season in 2018, Victorian Marc Polmans is targeting more play at ATP events and Grand Slams in 2019 - starting with the Australian Open, where he has received a wildcard. 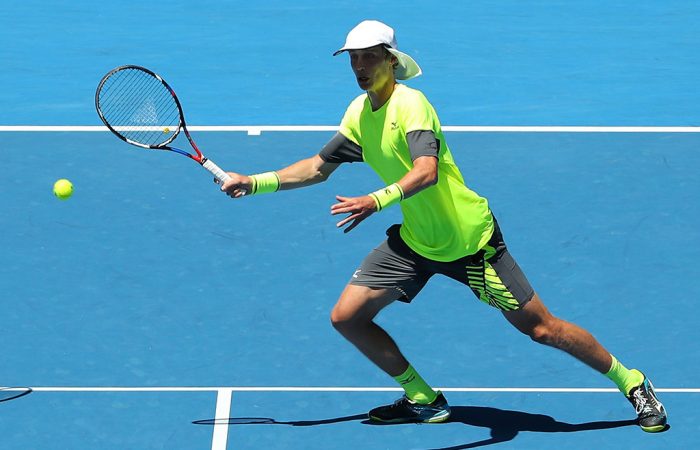 Home charge Marc Polmans is determined to take advantage of his Australian Open wildcard when he debuts in the main draw at Melbourne Park next week.

“Very grateful for the WC Tennis Australia,” tweeted the 21-year-old. “My team and I have worked hard for this opportunity #vamos.”

Very grateful for the WC @TennisAustralia , my team and I have worked hard for this opportunity #vamos 🇦🇺🇦🇺🇦🇺🙏🙏 https://t.co/Cecc8O7OoO

The Melbourne local flourished in a career-best season in 2018, jumping up from No.318 to conclude his season as the world No.144.

The Victorian claimed four professional titles in the past 12 months, including the biggest of his career at the Launceston Challenger. After Launceston he went on a tear on the Australian Pro Tour, winning 24 straight matches throughout February and March in Renmark, Mildura and Mornington.

“It was a great year … to work my way into the top 150 is a good achievement for me for the end of the year,” Polmans reflected.

The 21-year-old acknowledges the sharp step up at Grand Slam level and is eager to use his experiences from 2018 as a catalyst for success at Melbourne Park later this month.

“It was a bit different for me, because I haven’t played much at the Grand Slam level,” said Polmans. “So to play qualifying of all of the Slams (in 2018) was a big confidence booster because I gained a lot of experience from playing. Now a big Aussie Open is coming up soon – I’m looking forward to that. It was great to learn from playing the Slams this year.”

Polmans has enjoyed doubles success on his home courts at the Australian Open; partnering countryman Andrew Whittington, the duo reached the men’s doubles semifinals back on 2017. Last year he joined compatriot Storm Sanders to soar into the mixed doubles quarterfinals.

Polmans feels these results mean the towering local is better prepared to perform at his peak on the elite stage.

“I find it a bit nervy, because you’re playing at a Grand Slam; it’s something that you dream of as a kid,” said Polmans, who hailed his improvement on serve and playing with more aggression. “Every moment out there was awesome so hopefully this year I can have better results in the Slams.”

The 21-year-old hopes his incremental rise can keep him competing on the top tier of men’s tennis.