Ash Barty is back in the Sydney International quarterfinals after an incredible performance on Wednesday to beat Simona Halep - her first win over a world No.1. 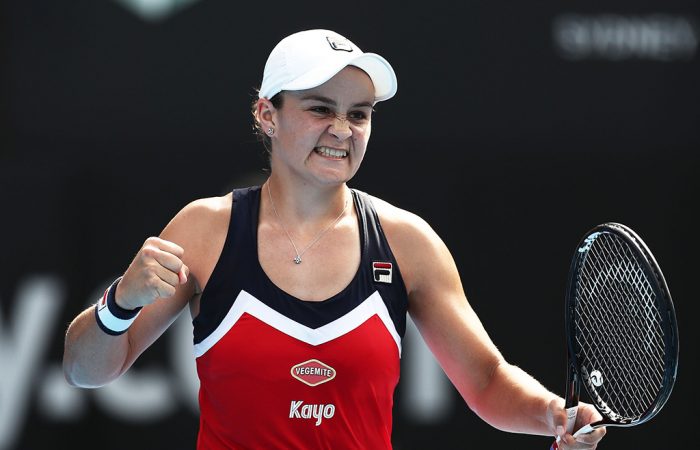 Focused from the get go, Barty surged into the Sydney International quarterfinals with a 6-4 6-4 triumph over the reigning French Open champion and 2018 Australian Open runner-up.

Her win at Ken Rosewall Arena followed on from Alex De Minaur’s workmanlike 6-4 7-6(5) victory over American qualifier Reilly Opelka, a result sending him through to the quarterfinals as well.

Both he and Barty were finalists in Sydney 12 months ago.

Sam Stosur, however, was unable to join her compatriots in the last eight, winning the first set before fading to a 5-7 6-4 6-3 loss to former world No.9 Timea Bacsinszky.

“I finally learnt my lesson,” a beaming Barty said.

“She gave me a belting in Montreal. I learnt a little bit more in Cincinnati, but today I knuckled down and really thought about it and really gave myself a chance.

“The biggest thing, I believed that I could I win. We’re both out here on the same court. Just very happy I was able to come out and execute.

“I felt like it was really clean, considering the conditions. It was very swirly down at court level so I figure if I’m going to play ‘Sim’ at any time, it’s her first match and in conditions like this.

“So I was very happy I was able to make the most of it. Yeah, extremely pleased.”

Next up on Thursday for the world No.15 is either Belgian 10th seed Elise Mertens, 2016 Olympic champion Monica Puig or Estonian Anett Kontaveit.