Alex De Minaur will meet fellow Australian Jordan Thompson for a spot in the Sydney International semifinals after beating Reilly Opelka on Wednesday. 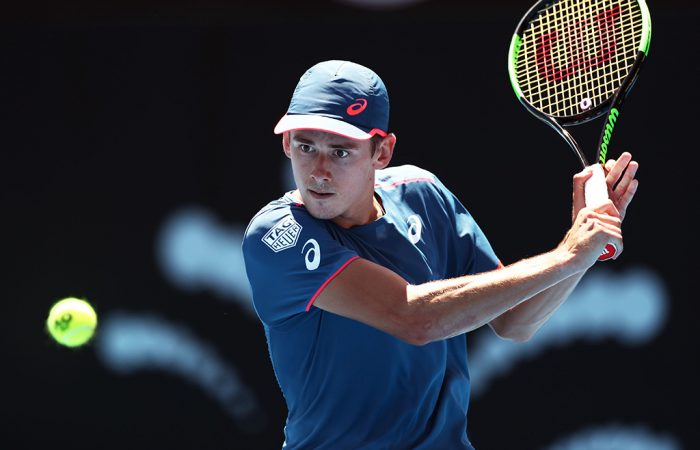 Alex De Minaur has cut down the equal-tallest man in professional tennis to move into the Sydney International quarterfinals for a second straight year.

In a match suspended on Tuesday night after just one game due to heavy rain, De Minaur was relieved after returning to Ken Rosewall Arena 14 hours later to carve out a hard-earned 6-4 7-6(5) victory over towering American qualifier Reilly Opelka.

The victory sets up an all-Australian quarterfinal against Jordan Thompson, who on Tuesday came from behind to defeat Taro Daniel in three sets.

De Minaur and Thompson met just last week in the second round in Brisbane, with De Minaur taking the honours 6-4 6-2.

INCREDIBLE: De Minaur wins the match in one of the toughest sets you'll see.

Opelka, who stands as high as tennis man mountain Ivo Karlovic at 211cm, thundered down 17 aces in 11 service games.

Crucially, De Minaur nabbed the only service break of the match before rain halted play late Monday night before fighting back from 4-1 down in the second-set tiebreaker to progress.

De Minaur said that he came out for last night’s match on fire, before struggling a little more when play resumed on Wednesday.

“I played an unbelievable return game (last night) … in the second set (today) I felt like I had my chances,” he said.

“For the most part, he played really well and just served aces and felt like I had one rally there where I missed sort of a backhand pass and was a little bit frustrated about it.

“But I had to regroup and focus on my side of the court, and I’m happy I was able to turn that tiebreak around.”

The fifth-seeded teenage ace, who has soared from No.208 to 29th in the world since making the Sydney final last year, has become a cult hero in front of home fans.

“There’s nothing better than this. I love playing here. I love playing at home, loving playing in front of you guys and I can’t wait to just keep it going,” De Minaur said.

But the 19-year-old may have to share some of the crowd support on Thursday with fellow Sydneysider Thompson, who has made the most of his wildcard to reach the last eight for the first time in five attempts.

“Jordan’s playing some great tennis. We’re both Sydney boys. It should be lots of fun,” De Minaur said.

“There’s nothing better than us both going out there and competing and leaving it all out there and see what happens. I’m really looking forward to it, and it should be fun.

“That’s what I put in the hard work for. Throughout the whole preseason I feel like I’m in great shape both mentally and physically. I’m loving being out there on court, and can’t wait for my next round.”