Millman, Thompson fight back to win in Sydney

An ill John Millman recovered from 0-3 and 2-4 down in the final set to see off Frances Tiafoe at the Sydney International, while Jordan Thompson trailed by a set and 4-2 before beating Taro Daniel. 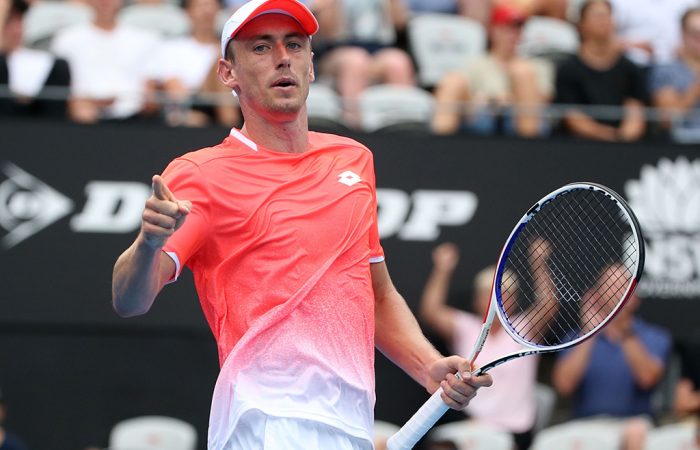 An ailing John Millman has staged a mighty fightback to reach the second round of the Sydney International with a pulsating win over rising American Frances Tiafoe.

Millman revealed he considered withdrawing after waking up from Monday night’s Fast4 exhibition appearance alongside Nick Kyrgios with the flu before outlasting Tiafoe 4-6 7-6(5) 7-5 in a two-hour, 39-minute Ken Rosewall Arena thriller on Tuesday.

“It was a tough decision to come out today. I was actually pretty crook. I woke up this morning with the flu and (was) really dizzy out there,” he said.

“But any chance to play at home in Australia, I think you’ve gotta take it, so I tried to come out here and give it everything.”

In other Australian results, Jordan Thompson recovered from 6-3 4-2 down to beat Taro Daniel 3-6 7-6(5) 6-0 while persistent rain forced the cancellation of play when Alex De Minaur was just one game into his second-round night match against American qualifier Reilly Opelka.

The US Open quarterfinalist trailed Tiafoe after falling a set and a service break behind in the searing Sydney summer heat.

But, rather than raising the white flag and heading to Melbourne to recover for Monday’s Australian Open start, the Queenslander sparked a bout of Millmania inside Ken Rosewall Arena.

After snatching the second-set tiebreaker, the world No.38 repeatedly relinquished his serve in the decider to his opponent ranked just one spot below.

“It’s that never say die attitude that a lot of Australians have.

“Definitely in that third set, with a bit of momentum, I was down a few times.”

Wildcard Thompson became the first player through to the Sydney International quarterfinals after fighting back to claim a three-set win over Troy Daniel.

Thompson found himself a set and break down on Tuesday evening, but took advantage of the tiring world No.78 to win in two hours and 26 minutes.

Daniel had Thompson on the ropes early in the second set but after losing a tense tiebreaker, completely fell apart in the third.

COMEBACK! Jordan Thompson was down a set and a break against Taro Daniel, but showed plenty of ticker to bring it back.

Thompson’s victory comes just a day after the world No.72 beat Adrian Mannarino in the first round in what was his first win over a top-50 opponent in more than a year.

The 24-year-old now progresses to a final-eight match-up against either De Minaur or Opelka.

It is the first time the Sydneysider has reached the quarterfinals in his home city in five attempts, having made the second round on two occasions.