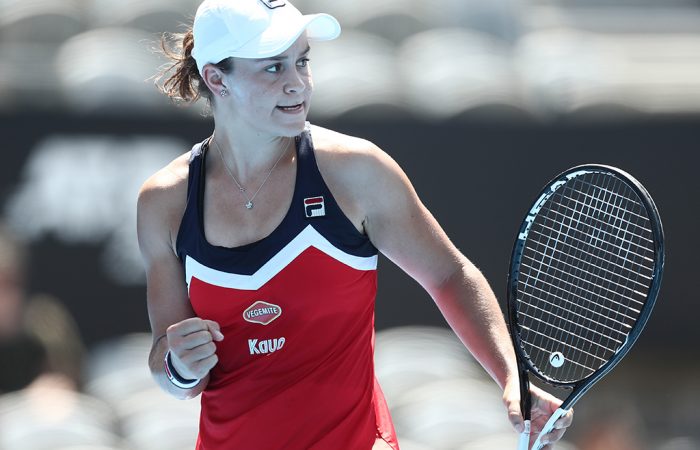 Ash Barty has set up a pre-Australian Open showdown with world No.1 Simona Halep with a comprehensive first-round victory at the Sydney International.

Confirming her status as a dark horse at Melbourne Park, Barty had too many guns for 2017 French Open champion Jelena Ostapenko, swatting aside the Latvian 6-3 6-3 in one hour and 15 minutes on Tuesday.

She has now won two of her three career meetings with Ostapenko.

The Australian No.1 will be seeded 15th in Melbourne next week, her highest position in a Grand Slam draw, and can gauge her improvement in a blockbuster match-up with Halep five days out from the season’s first major.

Barty has lost all four previous encounters with the Romanian – in Montreal and Cincinnati last year – but is making no secret of her desire to take her game to the next level in 2019.

TICKETS: secure your seats to watch Barty take on Halep

“The ultimate goal is to go top 10. I’d love to go deep in a major and hopefully I can do it here in Australia,” Barty said after posting her third win from four outings this season.

The 22-year-old’s lone defeat so far came at the hands of world No.2 and reigning Wimbledon champion Angelique Kerber at last week’s Hopman Cup in Perth.

“A few areas of my serve I’d like to clean up. Look, it was a pretty straightforward match, which is what I’m most pleased with,” Barty said after beating Ostapenko.

“I feel like I have played enough matches now, I’m ready, feel pretty good on the court. There’s certainly no better challenge than coming up against Simona right before a Slam.

“It’s kind of the perfect opportunity for me to go out there and play freely and try a few different things.

“I think I’m going to have to serve well. She’s probably the best returner in the game. Using my forehand is obviously no secret. When I can get more forehands and backhands, I feel like I’m in control of more points. But it’s going to be an extremely physical match.”

Meanwhile, Hon continued her stirring run at the cut-throat Sydney event, through to the last 16 after beating Maria – a player ranked 90 places higher at No.71 – by a scoreline of 6-3 7-6(4).

The straight-sets victory was Hon’s third straight win, the first which came against top-60 player Aleksandra Krunic in the first round of qualifying.

Fabulous result at #SydneyTennis for @pribo98, who upsets Tatjana maria – a player ranked almost 100 places higher – to reach the second round!

That's three straight wins for the Australian qualifier, who next meets either Kasatkina or Sasnovich. #GoAussies pic.twitter.com/hSlbbpTTH6

Her reward, as well as an important rankings boost from her current standing of No.161, is a second-round shot at Russian eighth seed Daria Kasatkina or Serbian qualifier Aliaksandra Sasnovich.

If she wins her next match, Hon could face one of her idols, Stosur, for a place in the semifinals.