Alex De Minaur and Ajla Tomljanovic will take to the court on Friday for the Brisbane International quarterfinals - and the draw has slightly opened up for both. 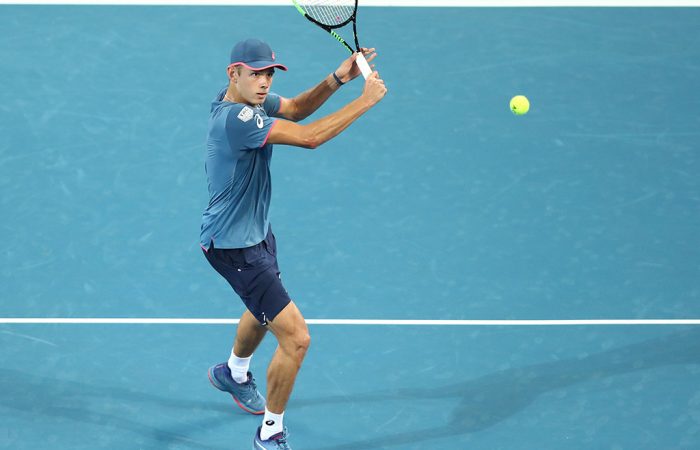 The departures of two of the world’s best could ease the path to the pointy end of the Brisbane International for Australia’s two remaining players.

But Ajla Tomljanovic and Alex De Minaur must first complete tough assignments if they’re to have a chance of taking advantage.

The pair will play back-to-back matches under lights in a blockbuster Friday night schedule at Pat Rafter Arena.

Australian No.1 De Minaur was on a collision course with Rafael Nadal before the Spanish great pulled out of the Australian Open warm-up with a thigh strain on Wednesday.

With expectations high De Minaur will have his best Australian Open campaign after breaking out last year, a hit-out with Nadal would have given the 19-year-old a strong indication of his prospects.

Instead, the seventh seed will take on French veteran Jo-Wilfried Tsonga – who himself is a former world No.5 – after easily accounting for countryman Jordan Thompson on Wednesday.

De Minaur has never faced Tsonga, now ranked 239th, but described him as “one of those guys you watch a lot on TV”.

Should he progress, a final-four clash with top-20 players Milos Raonic or Dimitri Medvedev awaits.

Tomljanovic will next face fifth seed Karolina Pliskova in her quarterfinal on Friday but will avoid top seed and defending champion Elina Svitolina if she wins.

Svitolina was upset by world No.30 Aliaksandra Sasnovich, the 2018 runner-up, while Tomljanovic caused a surprise of her own when she downed British former world No.4 Johanna Konta in straight sets on Wednesday.

World No.46 Tomljanovic lost her only WTA-level encounter with Pliskova in 2015 but has had a stellar 12 months in which she put a couple of injury-hit seasons behind her to climb 72 places up the rankings.

But she knows she’s the underdog against Pliskova.

“I expect her to come out swinging,” Tomljanovic said. “There’s no secret to how she plays. Big serve, big ground strokes. There won’t be many long points.

“But I just kind of want to stay within myself and take care of what I can, because I know she will most likely execute her shots and her serves.

“So I’ll just have to hang in there and take care of myself.”

A win would see her face Sasnovich or Croatia’s Donna Vekic, who’s ranked 34th, in the semi-finals.