Colin Sinclair and Kai Chen Chang are among the winners on day one of the Australian Open Asia-Pacific Wildcard Play-off. The 2019 Australian Open Asia-Pacific Wildcard Play-off kicked off on Wednesday in Zhuhai, China.

World No.495 Colin Sinclair, the first player from the Northern Mariana Islands to compete in this event, upset China’s two-time champion Di Wu, defeating him 6-2 6-3 to move into the men’s singles second round.

Wu struggled with Sinclair’s big serve throughout the match, only grabbing his first break in the second set to take 2-0 lead, but Sinclair broke back immediately with a love game. After crucial battles in the seventh and eighth games, the 23-year-old secured his win over the local favorite.

“I had my chances,” Wu said after the match, “but my opponent played really well. I was surprised by how well he moved on the court today. I tried everything, somehow he was able to play another ball back.”

Thanks to his coach back in the Northern Mariana Islands, who “kinda kept an eye on this event”, Sinclair was granted a wildcard from Tennis Australia to come to Zhuhai, and is now a step closer to fulfilling his dream of playing at the Australian Open.

“I wanted to get the nerves out early, swing through the ball, stay aggressive and play my game. I think I did that today.

“To play a Grand Slam would be huge. I grew up and played in Brisbane since I was 10, and I have a home there, call Australia ‘home’ right now, so I’d love to play in the Australian Open.” 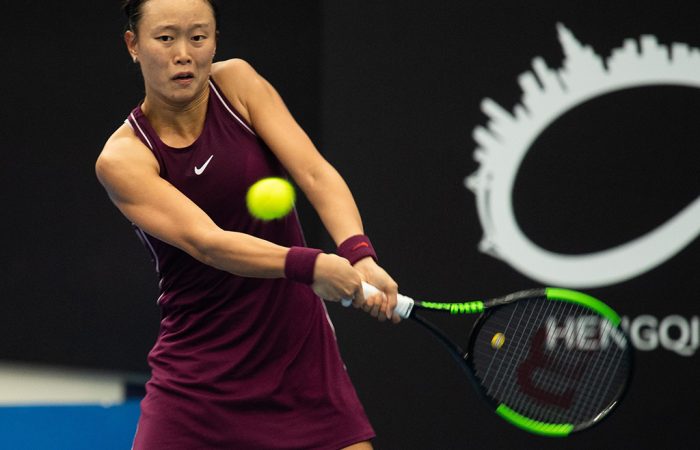 Up next, Sinclair will face another Chinese challenge, No.2 seed and 2015 champion Ze Zhang, who dispatched Sidharth Rawat from India 6-4 6-2.

Wang broke early to take the lead, but Chang fought back from 2-5 and saved three set points to level the match.

Wang got on top eventually on her fifth set point in the 12th game, after Chang sent a backhand wide.

With her back against the wall, Chang changed her tactics in the second set and played more patiently, and it worked out right away. Ten years younger, Wang started to make more unforced errors and feel frustrated. Chang never got broken again and went on to win this cross-strait battle.

“The Australian Open is one of my favourite tournaments, I’d love to go back to Melbourne again to play,” Chang said.

In other matches, Chihiro Muramatsu was the only Japanese player to battle through, knocking out China’s No.3 seed Fang Ying Xun 6-3 6-3.

Jang will play Chang next and Yadlapalli face Muramatsu.