Maverick Banes comfortably won his two matches on a rain-affected Sunday to earn the Australian Pro Tour title in Toowoomba. 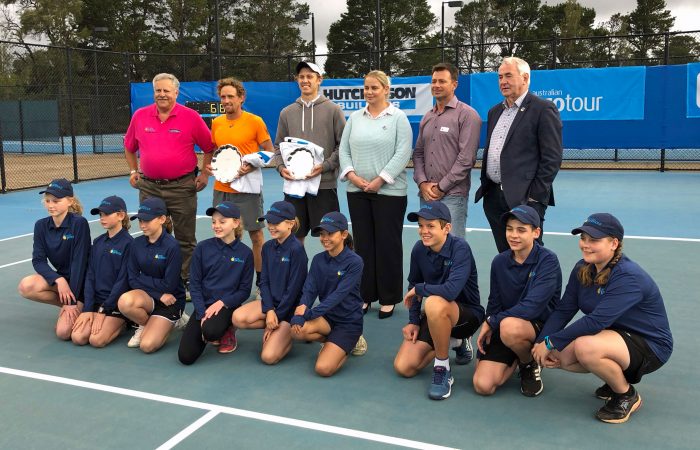 Maverick Banes has come through qualifying to take the Hutchinson Builders Toowoomba International title on Sunday.

Aside from the weather – which severely hampered play throughout the tournament – it was a solid week for the 26-year-old Queenslander, who took advantage of a wildcard to qualify before assuming the position of top seed.

He was made to work early by youngsters Lucas Vuradin and Alexander Crnokrak before finding another gear and easing through his final two matches, defeating Victorian Matthew Romios 6-1 6-1 in the semifinal and Colin Sinclair (No.6) of the North Mariana Islands 6-4 6-2 in the final, both on Sunday.

Banes was forced from the court on two occasions during the final when standing at match point.

“It’s been a bit of a frustrating time the last couple of days with the rain, especially at the end there, one point away,” he said. “But I was just happy I was able to stay focused and get the win.

“I definitely had tough matches in the first two rounds. I was a set and a break down against Vuradin who was playing really well. I was still struggling a little bit with confidence so it was good to get through those matches when I wasn’t playing my best. Just sticking at it and competing well helped me turn it around and play well all the way through to the final.”

Banes, the world No.250, made a late decision to return home for some Australian Pro Tour events to build confidence after some mixed results on tour in recent times.

“It ended up being perfect for me, to get eight matches in ten days,” he said. “I’ve got some confidence back and I’m on a little bit of a run now, so hopefully I’ll be able to continue it heading into Melbourne and Canberra.”

The win represents Banes’ third ITF Futures title in 2018 and his seventh overall, alongside his maiden ATP Challenger title in Gwangju earlier this year.

The doubles title in Toowoomba was taken out by second seeds Blake Ellis and Luke Saville who edged their way past the tournament’s No.1 pairing of Brit Brydan Klein and Scott Puodziunas, 6-4 6-7(2) [10-2].