Australia’s most promising 14/u and 12/u junior tennis players have battled in out in Canberra for national claycourt titles. 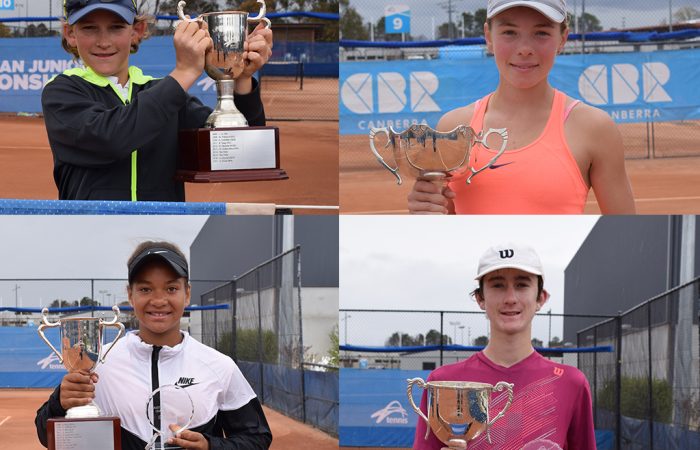 The 2018 12/u & 14/u Australian Claycourt Championships wrapped up in Canberra today after 128 of Australia’s most promising junior tennis players battled it out for a prestigious national title.

It was a big day for Charlie Camus who also won the 12/u doubles championships alongside Pavle Marinkov.

“It feels pretty good to win my first ever national title especially here in my hometown, Canberra,” Camus said.

“I think I played really disciplined, kept my cool and didn’t lose my head throughout the week which helped with my results.

“My goals as a junior tennis player is to one day win a Grand Slam and represent Australia in Davis Cup.”

“It’s a really good feeling to win the title, I can’t explain how I feel but it’s amazing,” 14/u girls champion Mia Repac said.

“I think playing on clay it can be really challenging tactically, physically and mentally so I think my fight is definitely something that helped me take out the title this week.”

Designed to increase sportsmanship and fair play, all participants, parents and coaches are encouraged to shake hands both before and after competition.

As well as shaking hands in the spirit of friendly competition before each match, parents/guardians and coaches were also invited to listen to the pre-match instructions from the chair umpire or court supervisor.

“It was great the national junior claycourt championships was the first Australian tournament to include the Handshake Challenge, and it set us up for a very successful week,” Tournament director Mark Pead said.

“The concept helps ecnourage sportsmanship between parents, participants, officials and everyone involved at the event and we are proud of everyone who graciously took part in the challenge.

“The overall event was a huge success and I’d like to congratulate and thank all of the players, volunteers, Tennis ACT staff, public and sponsors for getting on board another great Claycourt Championships here in Canberra.”

The conclusion of the Claycourt Championships rounds out a busy few weeks for tennis in Canberra which saw the nation’s capital also play host to the Canberra Junior International and the second Canberra Wheelchair Tennis Open.

The territory will now prepare to host the Apis Canberra International when the Australian Pro Tour makes its way to Canberra for a Men’s ATP Challenger tournament and Women’s ITF Tour.

Tournament draws and results can be found here.