Australia's Ajla Tomljanovic advances to the last eight of the Japan Women's Open in Hiroshima after compatriots Priscilla Hon and Arina Rodionova fall in the opening round. 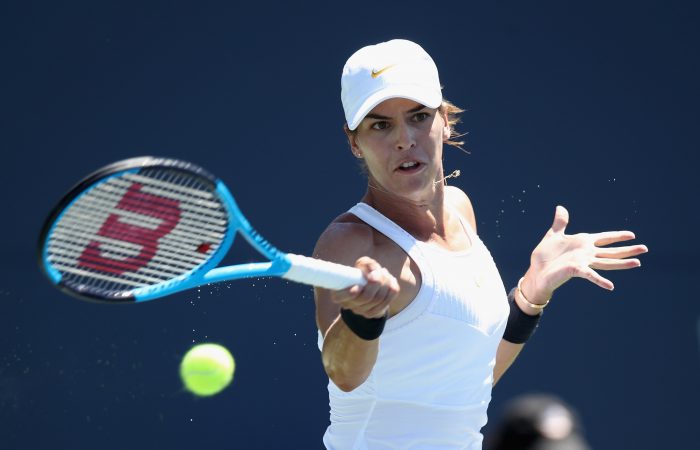 Fifth seed Ajla Tomljanovic set up a potential meeting with No.2 seed Hsieh Su-Wei at the Japan Women’s Open after winning on Wednesday in straight sets.

Tomljanovic subdued Zhu Lin of China 7-5 6-4 to cement a place in the quarterfinals.

She led 3-0 before rain fell, and found the going tough when play resumed before closing out the match on her fifth match point in one hour, 39 minutes.

“I thought she came out maybe stronger than me and after that rain I felt like I was a little too relaxed, thinking I’m 3-0 up, it’s a big lead when it’s really not,” Tomljanovic said.

“I kind of had to fight through some bad games that I played but she played well from start to finish after that rain delay, so I’m pretty happy I managed to get through even though I didn’t feel my best out there with the rain and everything.”

It’s her fifth WTA quarterfinal of 2018, after reaching the same stage in Monterrey, Rabat (where she went all the way to the final), Mallorca and San Jose.

Tomljanovic will face Hsieh should the world No.40 – who reached the fourth round at the Australian Open and Wimbledon – get past Luxembourg’s Mandy Minella.

On Tuesday, Australians Priscilla Hon and Arina Rodionova, both qualifiers into the main draw, lost their first-round matches.

Rodionova is also in the doubles draw, partnering fellow Aussie Ellen Perez. The duo are yet to lose a match, having recently captured two titles on the ITF circuit.

They face No.1 seeds Miyu Kato and Makoto Ninomaya in their first-round match.

Hon is in the doubles event as well, teaming with Brit Harriet Dart.

Another all-Aussie duo, Monique Adamczak and Jessica Moore, won their first-round match over Danka Kovinic and Silvia Soler-Espinosa on Tuesday to advance to the quarterfinals.