John Millman stages an incredible comeback to upset world No.2 Roger Federer for a place in his first Grand Slam quarterfinal at the US Open. 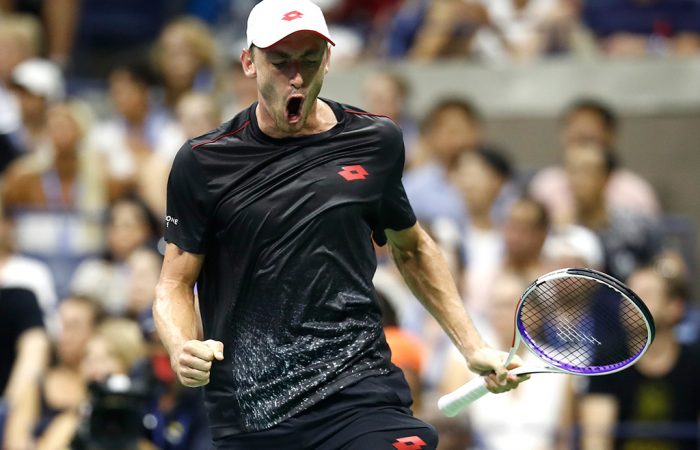 There he will face Novak Djokovic, who earlier on Monday defeated Joao Sousa in straight sets.

The win over Federer is Millman’s first over a top-10 opponent in 11 attempts and is expected to push him to a career-high ranking of No.37.

And it looked unlikely when he trailed 6-3, 5-4, 40-15. Yet Federer was unable to convert those set points and let Millman back into the match.

“I felt like a bit of a deer in headlights to begin with, to be honest with you. The feet weren’t moving, Roger had it on a string, he was manipulating me around the court,” Millman said.

“But I got out of a tough second set and really found my feet and started to be a little bit more aggressive.

“I’m probably in a bit of disbelief. I have so much respect for Roger and everything he’s done for the game, and he’s been a hero of mine.

“Today he was definitely not at his best but, you know, I’ll take it.”

And despite initially looking the far sharper player, he retreated into his shell and allowed Millman to make the match a brutally physical contest.

Millman played Federer similarly in their only previous meeting three years ago in Brisbane, fighting tigerishly before falling in three sets.

Tonight @usopen again showed us why it’s important to get out there and bring an attitude that has full time competitive fight attached to it. Congrats @johnhmillman , it’s the one major part of his game which is on REPEAT- it gives you opportunities. 👍👋#humble #honest

In the five-set format of Grand Slam tennis, he thrived against a listless, flat-footed Federer.

The Swiss superstar, a five-time champion at Flushing Meadows, tried to keep points short with frequent ventures to the net, yet finished the match with a less-than-impressive 62 per cent success rate (50/81) in the forecourt.

“I think I started to serve really well. And probably capitalised a little bit on Roger having an off service day,” Millman said.

“I’ve got to control the controllables. And I said that before I went out and played. And the one thing I can control is the fight in me.

“I’ve always done that throughout my career; it hasn’t been too easy. But I’ve always brought the fight out and that’s what it’s about, when I’m kind of revving myself up.”

what a pleasure to interview John after his amazing 😉 victory over RF2.0

That fight was demonstrated in an epic second game of the second set, which extended 14 minutes and during which Millman held seven break points. Although he didn’t convert any of them and Federer eventually held for 1-1, Millman had sent a powerful message with his grinding style.

In the third set, Federer held a set point in the tiebreak but Millman escaped, and the Australian recovered from 4-2 down in the fourth set to ensure another tiebreak would be required.

Three points later, the Aussie has sealed a famous victory and booked a date with Djokovic.

“Last time I played him I got three games at Queen’s,” said Millman, referring to his 6-2 6-1 loss to the Serb in June.

“Novak’s an incredible player, he’s playing such good tennis right now I think off Wimbledon, winning Cincinnati also. He moves incredibly well. He’s another guy that I’ve looked up to, with his game style and the way he goes about it.”

“It’s one o’clock now – probably should try to get a recovery.”