The Australian side for the upcoming Davis Cup tie against Austria next week has been named. 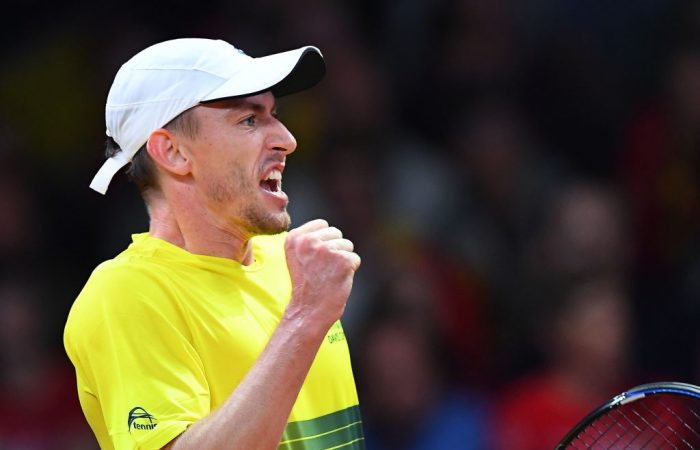 The two nations will meet for the first time in 13 years on outdoor clay at the Messe Congress Graz, a temporary stadium in Austria’s second largest city, from Friday 14 to Sunday 16 September.

Millman achieved his best ever Grand Slam result to date, making the quarterfinals at the US Open after defeating world No.2 Roger Federer earlier today. Millman is the first Australian man to reach this stage of the tournament since Hewitt in 2006.

The 29-year-old reached a career high ranking of world No.49 in July, and is projected to move into the top 40 when the rankings are released next week.

De Minaur, the second youngest player in the world’s top 50, continues to also impress after a spectacular third round appearance at the US Open.

The teenage sensation led world No.7 Marin Cilic two sets to love and fought for every point before falling to the 2014 US Open champion in five sets.

Hewitt last played Davis Cup at Australia’s World Group first round tie against the United States in March 2016, teaming with Peers in the doubles rubber.

Hewitt said the team was looking forward to the clash against Austria next week.

“It’s a great honour to wear the green and gold and we will be doing everything possible to come together as a tight team and get the result we want,” Hewitt said.

“The Austrians are a tough unit that we have a lot of respect for and we are really going to enjoy the battle.

“Both John and Alex will be high on confidence with their great performances at the US Open, and achieving the best Grand Slam results of their careers. You can’t underestimate what a difference that confidence can make as we head into a tight tie.

“Jordan has had some of his biggest victories in Davis Cup and John Peers will be confident after winning the Toronto Masters Series doubles title and cementing his spot within the top five doubles players in the world.”

Australian Davis Cup great Tony Roche added, “We are really looking forward to coming together as a team to face the tough assignment of beating Austria away on clay, and it’s fantastic that we have Lleyton as an option within the five.”

Austria are yet to name their team however world No.9 Dominic Thiem is expected to return to the side after missing April’s tie due to injury.

Dennis Novak, Sebastian Ofner, Philipp Oswald and veteran Jurgen Melzer, who has played the most ties for his country – 34 over 20 years – in history all featured against Russia earlier this year.

• This tie will be the fourth meeting between the two nations, with Australia leading the head-to-head record 2-1
• Australia won their last encounter 5-0 in 2005, played on grass in Sydney
• The two nations first played each other in 1905 and did not meet again until 1989, when Austria scored a 5-0 win in Vienna
• Austria defeated Russia 3-1 in April to advance to the World Group Play-offs for the first time in five years
• Graz will host its first Davis Cup tie since 2006 when Austria fell 2-3 to Croatia in the World Group first round.