Kubler, Gavrilova fall at US Open

Jason Kubler suffers injury heartbreak at the US Open while Daria Gavrilova proves no match for a resurgent Victoria Azarenka. 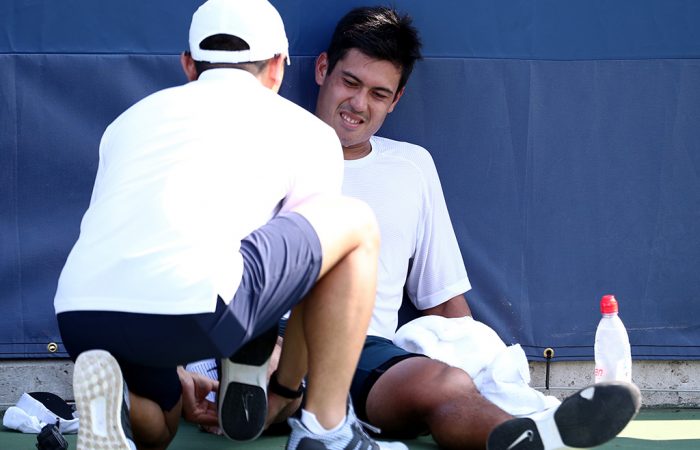 Australian tennis battler Jason Kubler has been cleared of a broken ankle after suffering a shattering injury blow at the US Open.

The luckless 25-year-old was sent to a New York hospital after being forced to retire from his second-round match against American young gun Taylor Fritz after rolling his ankle late in the third set.

Kubler had been closing in on the most significant win of his injury-plagued career before disaster struck and, unable to serve or run, he reluctantly called it quits while trailing 6-3 3-6 6-3.

Earlier, Daria Gavrilova lamented a Grand Slam season of lost opportunity after falling in the second round to Victoria Azarenka.

Gavrilova succumbed 6-1 6-2 to the resurgent former world No.1 and two-time Australian Open champion.

NEWS: Barty beats Safarova to reach US Open third round

Kubler had fought back from a break down in the third set to be holding game point serving at 3-4 when disaster struck.

He crumpled to the court in despair after his right foot got stuck in the sticky cement surface while reaching for a forehand on another baking hot day at Flushing Meadows.

After several minutes of treatment from the tour physio, Kubler received generous applause from the crowd as he hobbled to his changeover chair to have the ankle taped.

He gamely played on but, immediately upon the resumption from his medical time-out, the 25-year-old hit two weak forehand errors to gift Fritz a break before the American closed out the set as Kubler walked gingerly back to his chair.

With the US Open’s new heat rule in effect, the two players opted to take a 10-minute break. But it didn’t help Kubler at all.

The Queenslander played only two points of the fourth set before conceding.

Only two days ago, Kubler savoured his long-awaited first-ever win at a Grand Slam after waiting eight years between majors due to six rounds of knee surgery.

He is projected to rise to a career-high ranking of No.90.

Meanwhile, Gavrilova, the No.25 seed, expressed her disappointment at a performance that saw her produce just 14 winners to 27 unforced errors.

“I just didn’t execute today,” she said. “I was just making way too many errors with my forehand. My serving percentage was pretty poor too, so it puts me under a lot of pressure.”

“It doesn’t help when you’re losing and it’s hot as well so you have to fight the heat and the opponent and your emotions because you’re not playing as well as you want to,” she said.

“So it gets a bit frustrating.”

Most frustrating of all for the 24-year-old was her inability to convert promising starts at any of the season’s majors.

For the first time, Gavrilova won matches at all four slams, reaching the third round in Paris and London – without moving on.

“It sucks not making the second week,” said the former world junior champion.

“This was probably a tough second round, but I’m not too happy overall.”