Ash Barty and John Peers have scooped prestigious doubles titles in Canada, with Barty partnering Demi Schuurs to victory in Montreal after Peers combined with Henri Kontinen to triumph in Toronto. 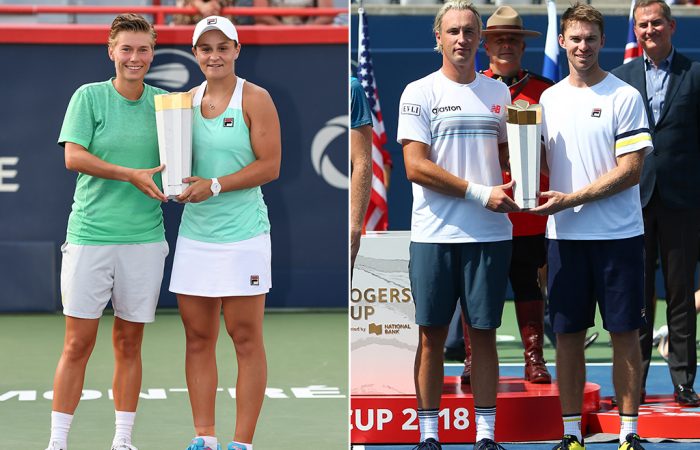 Ash Barty has capped a stellar week in Montreal by claiming the doubles title with Dutchwoman Demi Schuurs in Montreal.

After reaching the semifinals in the singles, where she lost to world No.1 and eventual champion Simona Halep, Barty and Schuurs combined to beat No.2 seeds Latisha Chan and Ekaterina Makarova 4-6 6-3 [10-8].

Barty and Schuurs are undefeated as a duo; in their only other tournament together, they won the big clay-court title in Rome.

Barty, who also won the Miami Open with CoCo Vandeweghe, is one of the few players on tour excelling in both singles and doubles this season. In addition to being 16th in singles, the Queenslander is also No.16 in doubles and is projected to rise to 11th in the new release of the WTA rankings.

“It’s been a busy week, a busy but a good week,” Barty told wtatennis.com. “It’s always nice to get to the end of the week and be tired from playing matches, I suppose. That’s why we’re here, and it’s a great start to the US swing for me.”

What a week at the @rogerscup with @henrikontinen! Thanks everyone for all of the support! pic.twitter.com/pNBBGh3xk9

A few hours earlier on Sunday at the ATP Masters event in Toronto, John Peers and Finnish teammate Henri Kontinen won their third title of the season by defeating Raven Klaasen and Michael Venus 6-2 6-7(7) [10-6].

Peers and Kontinen, who won the Australian Open and ATP Finals trophies in 2017, improved their season record to 18-12.

“We try to save the best for last each tournament and try to enjoy it and keep rolling with it,” Peers told atpworldtour.com.

Peers and Kontinen are the No.3 seeds at this week’s ATP Masters tournament in Cincinnati, while Barty will link back up with Vandeweghe at the WTA event at the same venue.

At the ITF $60,000 event in Landisville, Pennsylvania, Arina Rodionova and Ellen Perez remain undefeated as a team after scooping their second title.

The Australians overwhelmed Chen Pei Hsuan and Wu Fang-Hsien – both of Chinese Taipei – 6-0 6-2 to win their second ITF title in three weeks. Their win-loss record as a duo stands at 7-0.