World No.1 and top seed Simona Halep stopped Ash Barty in the semifinals of the Coupe Rogers in Montreal, yet the Aussie is through to the doubles final with Demi Schuurs. 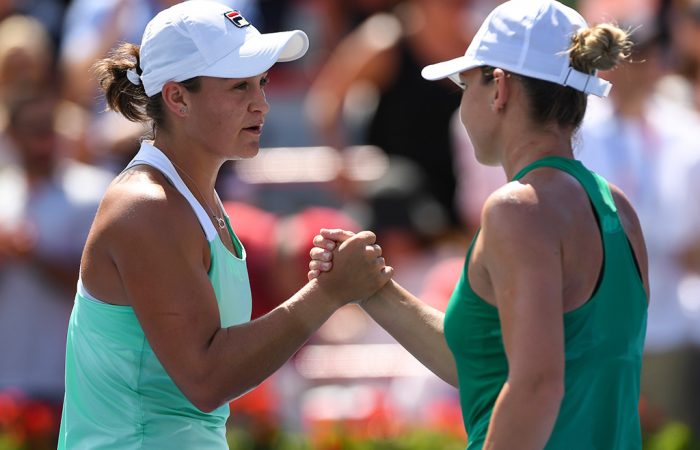 Australian Ash Barty has bowed out of the Canadian Open after suffering a straight-sets semifinal defeat to world No.1 Simona Halep.

The top seed cruised to her third career final in Canada with a 6-4 6-1 victory over the error-prone 15th-seeded Barty in Montreal on Saturday.

However, Barty did experience some joy on Saturday, teaming with Dutchwoman Demi Schuurs to advance to the doubles final.

A moment to enjoy and learn… Too good today, Sim. Looking forward to the dubs final tomorrow ☺️ pic.twitter.com/Yzg6YSolh5

Halep employed a strategy based on making a high percentage of first serves and controlling the rallies.

Barty tried to do more with her first serve than her opponent and finished the contest with five aces.

But her 29 per cent winning percentage on second-serve points for the match – a reflection of Halep’s domination of the baseline rallies – proved to be her undoing.

“A moment to enjoy and learn… Too good today, Sim. Looking forward to the dubs final tomorrow,” Barty posted on Twitter after the loss.

Although Barty has one of the stronger forehands on the WTA Tour, Halep’s big edge on the backhand side meant most of the baseline points went her way.

“I think I played smart tennis today. I pushed her … on her backhand; then I could just receive a shorter ball, an easier ball for me to open the court,” Halep told wtatennis.com.

“I just went all the way also on her forehand, short, cross, long, everything. I played some slices. I think the match was a very good level of tennis even if the rhythm was a little bit mixed.”

Barty, who faced Halep for the first time in her career, converted just one of seven break point chances she created and racked up 37 unforced errors.

Halep won seven of the last eight games to wrap up the encounter in one hour and ten minutes.

Halep will in the final meet US Open winner Sloane Stephens, who beat defending champion Elina Svitolina in straight sets.