Playing the tennis of his life in his 13th year as a pro, Matt Ebden credits his entry into the top 50 to improvements across the board and some valuable lessons learned. 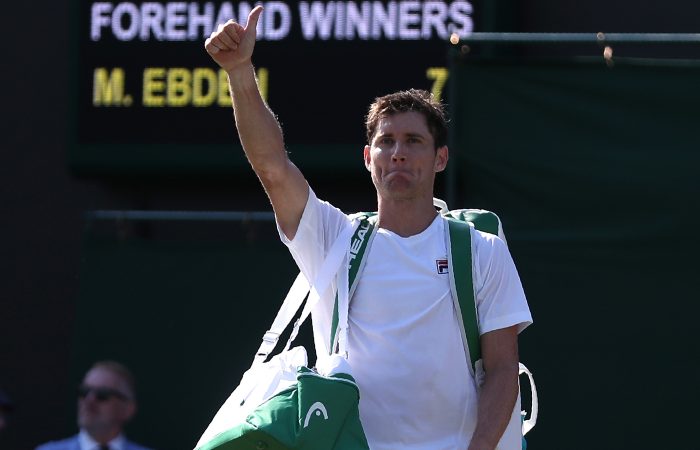 Matt Ebden’s goal was to reach the top 50.

He got there – just two years later than he had envisaged.

The West Australian peaked at world No.43 just over two weeks ago after his run to the third round at Wimbledon. That was his best-ever result at a Grand Slam tournament, which was followed by his first appearance in the elite top-50 bracket in a pro career dating back to 2006.

He dropped out for a single week after falling early in Newport – where he had reached the final the previous year – but he rebounded quickly, rising five places last week to No.50 after advancing to the semifinals in Atlanta, an event marking the start of the US hard court season.

In all, Ebden has won 14 of 20 matches since Roland Garros and improved his ranking by around 20 places. He’s in the form of his life.

“I’ve sort of been around a few years now, more experienced, I know what to expect from these events, from these players, from myself, what I need to do better,” the 30-year-old said at Wimbledon. “I’ve been learning for quite a few years now. A bit up and down here and there over the years. I’ve been bringing my best level to the match court more often than not nearly every day in all the matches I’ve played in the last 12 to 18 months.

“I’ve always known and shown I’ve had that level at times over the years. So it’s not a surprise to me the kinds of guys I can beat often. But now doing it all the time is key if I want to be myself ranked where the guy I played today is, basically.”

“The guy” he was referring to was David Goffin, the No.9 seed whom Ebden clinically dispatched in the first round at the All England Club.

Goffin was the latest in a long line of quality players Ebden has defeated this season. He upset John Isner, who was ranked 16th at the time, in the first round of this year’s Australian Open. In the first round in Acapulco, Ebden stopped defending champion Sam Querrey, then the world No.12. Former world No.6 Gilles Simon was a scalp in Miami. He beat 22nd-ranked German Philipp Kohlschreiber en route to the quarters in Halle then stretched world No.2 Roger Federer in two tight sets before succumbing 7-6(2) 7-5.

Ebden believed these sorts of results might have happened almost two years earlier. At the beginning of 2016, he on the cusp of the top 100 “with nothing (ATP ranking points-wise) to defend for like four to five months.” A place in the top 50 felt very achievable.

A knee problem – which after multiple specialist appointments and scans was finally identified as a small flap of bone cartilage that was sticking out and catching, greatly affecting his movement – hampered him for months. He was off tour between February and September 2016 and saw his ranking to plummet as low as No.699.

“I probably would have only lost four weeks if I’d known exactly what (the problem) was in the beginning but ended up missing six months in the middle of the year and kind of lost the whole year,” he said.

“That time, though it does sort of set you back, also makes you put things in perspective, for sure. I think it gave me a bit of a — not scare, but it’s like a wake-up call, like this is not going to last forever. Even if it’s going to be another six or seven years at best (playing professionally), still one day it’s going to end.

“So maybe I needed a bit of a kick up the arse (laughter).”

What followed was emphatic. In 2017, he began working with a new coach in Liam Smith, and, from that low of No.699 in the first week of January, he shot up 623 places to finish the season at No.76. It was by far the biggest ranking improvement of any ATP player that season, helped by two Challenger titles and an appearance in his first ATP final in Newport. He finished the season with a win-loss record of 55-26.

And it set the stage for his career-best season in 2018.

Although his win-loss record currently stands at a more modest 24-18, the opposition and victories have been of a higher quality and they’ve come at more prestigious tournaments.

This level has been made possible by a more exacting approach to his career following that injury-ravaged 2016.

“The consistency’s been with myself, with my coach, with my team around me, with my training, my preparation, my intensity on the court, off the court, practice, match, Challenger, Grand Slam, doesn’t matter. (I’m) just planning everything much more meticulously, much more professionally I suppose, and really demanding a lot of myself day in, day out, all year.

“I think we’ve found a pretty good mix in the way we’re doing things and I’m really enjoying it with my coach, he’s helped me so much to take things up some levels.