Ebden on the road back

Matt Ebden, the former world No.61 recently back in action on the Australian Pro Tour, sat down with tennis.com.au to discuss his injury-ravaged 2016 season. 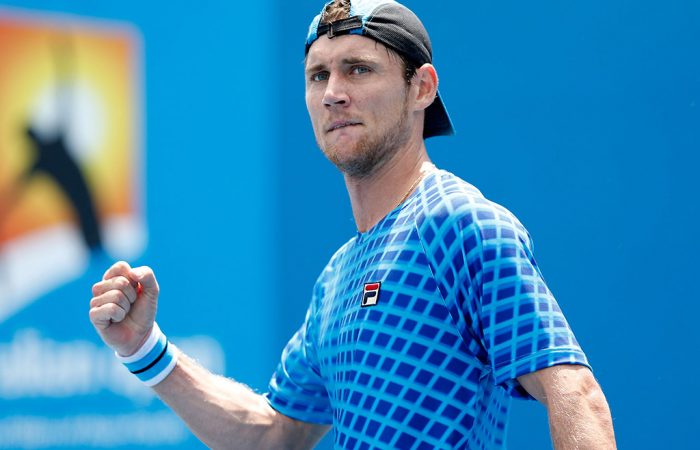 It started with a somewhat innocuous roll of the ankle in November 2015.

This morphed into a lengthy injury layoff that completely derailed Matt Ebden’s momentum and now sees the West Australian barely clinging to a place in the top 500.

Ebden has in the past six weeks stepped back onto the tour that he departed in February when he could no longer move on the court or put up with the pain. A 6-2 6-1 first-round loss to Jeremy Chardy at Delray Beach in mid February preceded a seven-month absence from competitive tennis, during which he sought advice and treatment from a multitude of health professionals in different countries, with little success.

After the Shanghai Masters in October 2015, Ebden won 11 of 15 matches on the Challenger Tour. It was at a tournament in Japan during this run when Ebden rolled his ankle. “I got up, had no problems, won the match, won the next day,” he recalled.

“Then about five days later I started getting a pain in the side of my knee. And it got worse and worse over a few days until one day I couldn’t walk. It was really jammed. I finished the season, didn’t think too much of it. Thought it was just overuse with the side of my leg.”

Ebden had played almost 120 matches across singles and doubles in 2015, making this assessment a logical one. He sought anti-inflammatory injections – which settled the pain somewhat – and prepared for the Australian summer. Yet his movement was hampered during losses in Canberra and Melbourne, and he tried more injections in conjunction with physio and rehab while playing in the US in February.

No luck. Ebden then headed to Florida’s Saddlebrook tennis facility for a month of rehab, hoping to play at Indian Wells and Miami. Yet he continued to struggle, and instead returned to Australia to consult with a range of doctors, physios and surgeons in a bid to determine the problem. A two-month period of intensive rehab and leg strengthening proved fruitless.

Good luck everyone at Indian Wells @BNPPARIBASOPEN , gutted can't play this year one of my favourites but hope to be ready for Miami

By now, it was June, the season already half over. The 28-year-old continued to train, but could only move a few metres each way – anything pushing him to end range or forcing him to bend proved too painful.

Finally, a visit to another surgeon unearthed the problem. “I had a scan and he identified something catching, so I went in for scope the next day. Within 20 or 30 minutes he’d got in there and smoothed it up. Within an hour, I walked out, and within a week I was hitting properly,” he said.

“The whole knee looked good – it was just one little area where there was a little flap that was sticking out and catching, like a bone or cartilage chip by my kneecap.

“(I felt) why couldn’t this have been done three or four months ago? But knees are very complicated and everyone is different and they’re never going to go straight for surgery because it was such a minor issue I had. I didn’t have a meniscus or joint problem … Usually just a few weeks’ rehab and rest and you’re on your way.

“I did everything by the textbook. Had a lot of good doctors, physios, surgeons guiding me … When that all didn’t work, the next step was to have the scope. It got to that point unfortunately.”

Ebden prepared for a return to the tour in September by playing practice matches in Perth to regain his movement and confidence. Beginning with a Challenger event in Taiwan, he then played qualifying at three Asian ATP events, beating world No.51 Mikhail Youzhny in Tokyo and pushing 65th-ranked Thomaz Bellucci in Shanghai.

Enjoying being back playing after strengthening last few months after injury. Nice to get going with some wins 👊 pic.twitter.com/YeYguGZiDd

Feeling better about his game, he returned to Perth for a two-week training block before contesting Australian Pro Tour events in Traralgon and Canberra, reaching the second round at both.

He plans to play two more Challenger tournaments to close 2016 and will target 2017 with a protected ranking of No.111. His actual ranking is currently No.475.

Ebden said he never considered that his career might be over, even as the months on the sidelines ticked over. It was nevertheless the longest he’d spent away from the game during a 10-year professional career.

In what can be a demoralising time for an athlete, Ebden said he was lucky during his absence to have a strong support team of family, friends and health professionals around him. Fellow pros Ryan Harrison and Kevin Anderson and Aussie players such as Sam Groth, Matt Reid and the also-injured Thanasi Kokkinakis reached out to him during this time.

“It’s the longest time I’ve spent in Australia since school,” he laughed. “It was nice in many ways and gave me lots of time to practice, work on my game, think about my game, get physically strong in the gym. I was in the gym three to four hours per day and I was practising one or two hours per day as well. I could still hit … The most I didn’t hit for was probably one week.

“Being out for a few months definitely made me appreciate being able to train and play week-in, week-out all these years, and definitely puts things into perspective. It does give you a bit of a shock – I’ve never really had a serious injury. Hopefully it pulls up well over the next few years.”

A former world No.61 in singles, a Australian Open champion in mixed doubles and a four-time winner on the ATP doubles circuit, Ebden is not accustomed to languishing so low in the rankings. And he set the bar high on his return – he told tennis.com.au that his aim had been to win his last four tournaments of the season. “Whether it’s a long shot or not, that’s fine,” he said.

Despite not doing so, the statement revealed some of the confidence that took him to the upper echelons of the ATP tour and demonstrated a level of desire and motivation that has only increased during his time away.

“I’ve been between 60 and 100 in the world for most of the last four or five years at least … it’s not like a goal to make top 100 anymore because I’ve been there quite a bit,” he said.

“I want to try to get to the top 50 at some stage and further if I can. That’s probably gonna be at least 12 months away given my ranking and how I have to do the schedule next year. I’ve got to be a bit smart with where I’m going to play – some tour events, Slams, Challengers, quallies, things like that. I’m just going to be happy being out there playing fit and healthy again.

“I know my level. I’ve played long enough on tour to know how good I am and the quality of players that I can beat pretty consistently and tournaments I can win. I’m looking at just improving my game as a whole.

“I’m probably in the second half of my career now. Probably at best I’ve got seven years ahead of me, something like that. Looking to make the most of them and try my best to go as hard as I can.”