Australia's men continued their winning ways at Wimbledon on Thursday, with Nick Kyrgios, Alex De Minaur and Matt Ebden sealing spots in the third round. 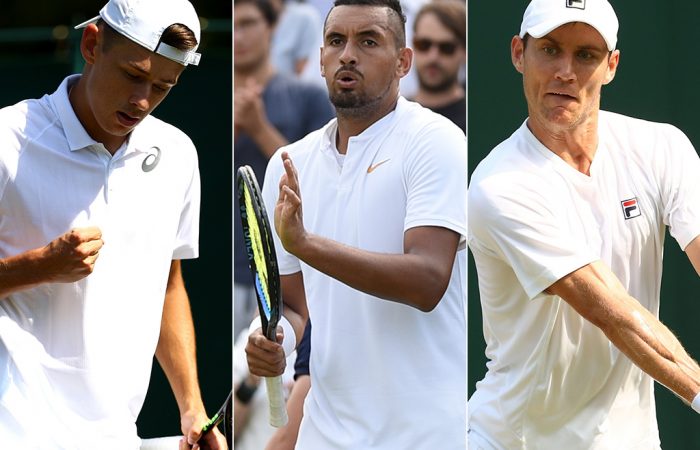 Australia’s impressive campaign at Wimbledon has continued, after Nick Kyrgios, Alex De Minaur and Matt Ebden on Thursday progressed to the third round.

After Ash Barty and Daria Gavrilova sealed their places in the last 32 of the women’s draw, Kyrgios completed a straight-sets victory over Dutchman Robin Haase.

In back-to-back matches on Court 14, De Minaur and Ebden scored four-set wins over Frenchman Pierre-Hugues Herbert and Stephane Robert respectively to join the No.15 seed in the third round.

“(It will be an) amazing experience and I’m really looking forward to it, playing a legend like he is,” the young Aussie said. “But then once I get on court it’s just gonna be another match. Just like my first couple of rounds I’m going to go back out there, compete, have fun, and leave it all out there. Nothing changes.”

Later on Thursday, Bernard Tomic fell to Kei Nishikori, but not before giving the 24th seed a major scare.

Kyrgios will now play Nishikori seeing off Haase in a mostly routine 6-3 6-4 7-5 triumph on No.3 Court.

Game set match @NickKyrgios! The 15th seed beats Robin Haase 6-3 6-4 7-5 to reach the third round at @Wimbledon. A business-like performance on No.3 Court 🙂 #GoAussies pic.twitter.com/z95qXE1sAb

After cruising through the first two sets and going up an immediate break in the third, Kyrgios dropped serve in the very next game, and also lost serve again in the eighth game after breaking in the seventh.

He admitted his focus wandered for a time.

“Towards the middle of the third set, I was getting a bit out of control. I was losing my focus. I was concentrating on things that were so irrelevant,” he said.

“I kind of had 5-5. Didn’t say a word. Broke. Served out the match. When I found the composure again, I got on with things, was able to close out the match.”

Kyrgios on his third round opponent Nishikori: "Incredibly tough. Kei is a guy I've never had a win against before. Grass is probably his least favorite surface. But he's capable on all surfaces. He's a nightmare. He's a great returner. Takes time away."

It was another exemplary serving performance from the 23-year-old, who has now reached this stage of the tournament four times in the last five years. He slammed 19 aces and won an incredible 91 per cent of his first-serve points.

“The first two sets, I was pretty impressed with my performance. Obviously third set got a bit rocky … (but) I knew the match was going to get tough at a certain stage,” he said.

“I’m just glad I got through it and didn’t have to go to four sets.”

Four sets was what it took De Minaur to get over the line. But he’ll take it.

The 19-year-old advanced to the third round at a Slam for the first time in his burgeoning career with a 6-2 6-7(8) 7-5 6-3 win over Herbert, a player largely known for his doubles exploits.

After De Minaur romped through the first set, Herbert broke early in the second, only for the youngster to break back immediately.

Despite dropping the second set De Minaur was neither discouraged or displayed any ill-effects from a heavy grass-court lead-in – he’s 13-2 since the French Open and required strapping on his leg in his first-round win – and promptly won the third and extended his lead to 5-2 in the fourth.

He made no mistake serving out the match at his first opportunity in the ninth game, and celebrated animatedly.

“Another great day for me. Played some unbelievable tennis. Managed to battle through. It wasn’t easy in stages but I just had put myself back out there, fire myself up and I was able to get the win,” De Minaur said.

“I went through stages when my energy wasn’t there and I managed to put myself back out there and find that second wind.

“I don’t think I had as many nerves today. Obviously had a great first-round win, and today I just tried to take it a little bit easier (on myself). It felt definitely more comfortable out there.”

Like De Minaur, Ebden beat a Frenchman on Court 14 to reach the third round at a Grand Slam tournament for the first time.

His breakthrough came via a 6-3 7-6(5) 4-6 6-1 win over the 38-year-old qualifier Robert, the perfect example of old-school attacking grass-court tennis.

Ebden served-and-volleyed 44 times (winning 30 of those points) and approached the net on 63 occasions for a success rate of 70 per cent.

After his first-round win, the West Australian had noted that Robert, despite being a talented ball-striker, barely moved his feet. And it was this flat-footedness that cost the Frenchman in the latter stages of the fourth set – he sprayed several errors due to his lack of set-up and the games flew by in Ebden’s favour.

The 30-year-old served out the final game confidently and raised his arms aloft in triumph after another successful trip to net on match point.

We have another winner! @mattebden records his best #Wimbledon result with a four-set win over Stephane Robert. #GoAussies pic.twitter.com/CRLdfVxNEu

“Of course I’m happy, but now I’m getting used to these sorts of situations I know not to get too happy, too sad, too excited, (and) waste too much energy with everyone congratulating you and thousands of messages … probably my coach and my wife take my phone away from me (laughter).

“He’s very talented, very dangerous, he’s won four matches on the grass. I knew I had to go out there and play just as well basically as against a seeded player.

“I’m just going the best I can each day, and loving it. All the stuff aside, all the excitement, at the end of the day it’s Wimbledon – I just wanna go out and play some tennis, and do what I love doing.”

Next up for Ebden is another Frenchman in former world No.6 Gilles Simon, now ranked 53rd.